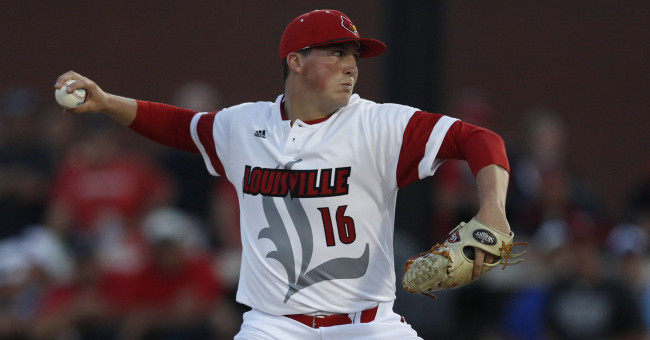 Generally speaking, we understand the lifecycle of a big-time pitching prospect in college baseball. They emerge as an elite talent quickly during their time in the program and eventually develop into a dominant force, or at the very least, they show flashes of dominance that make MLB scouts drool. Then, when they become eligible for the draft, they are drafted in the first several rounds, and with little left to prove at the college level, they head off to pro ball.

This is a well-traveled path, so much so that it makes waves when someone takes a path less traveled. Earlier in the countdown, we discussed Kentucky pitcher Kyle Cody’s decision to return to school for one more year, and today, we’re here to talk about the only college pitcher who turned more heads when he made his decision to return- Louisville’s Kyle Funkhouser.

As a freshman in 2013, in a somewhat limited role, he put up a 2.14 ERA in 22 appearances (six starts). As a sophomore, he announced his arrival among the elite pitchers in college baseball by going 13-3 with a 1.94 ERA and 122 strikeouts in 120.1 innings. As a junior, his stats weren’t quite as sparkling, but he still had a solid season, going 8-5 with a 3.20 ERA, and after the season, he was selected 35th overall by the Dodgers.

But instead of signing, he’s back, and his return puts the Cardinals on the shortlist of national championship contenders for the 2016 season. Together with Brendan McKay, Funkhouser is part of what very well could be the best one-two rotation combination in the nation, and with Zack Burdi and Corey Ray back as well, Louisville has four players who appear on Collegiate Baseball’s preseason First-Team All-American team.

They’ll face stiff competition from Miami in their own conference, and from the likes of Florida and Vanderbilt on the national scene, but with this type of proven talent returning, the Cardinals can beat them all.

Louisville at Notre Dame: 18 Innings, One For The Ages

Louisville Super Regional: Can Cal State Fullerton Get by Cardinals?