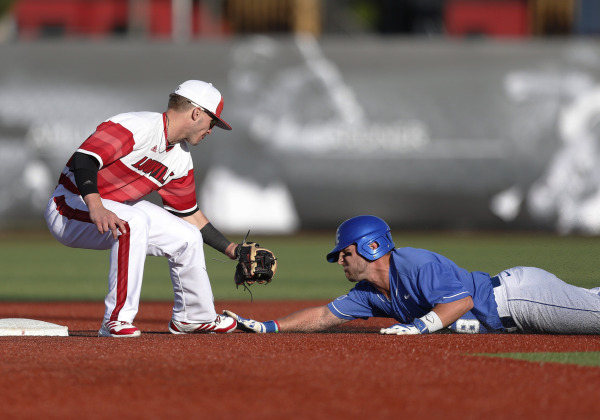 LOUISVILLE, Ky. – It was a regular season record breaking crowd of 5,056 at Jim Patterson Stadium Tuesday, as the Louisville Cardinals (35-10) defeated the Kentucky Wildcats (25-18) in a 10-inning Battle of the Bluegrass by the score of 2-1.

The Cats plated a run in the third inning when sophomore Connor Heady singled down the right field line, to start off the frame, and was then eventually brought home when freshman first baseman Evan White singled through the left side to put the Cats in front 1-0.

The game stayed a pitchers dual, as Louisville RHP Sean Leland pitched a solid game working 7.0 innings and giving up six hits while permitting just the one run.

Finally, in the bottom of the ninth the Cards punched through a stingy Kentucky bullpen when junior Danny Rosenbaum drew a 3-2 walk and Taylor came to the bag to pinch run. Then senior Sutton Whiting placed a sacrifice bunt to the pitcher and Taylor advanced to second base.

Taylor then stole third base, and Solak took the next at-bat and singled to right field on a 2-1 pitch to send Taylor home to tie the game 1-1.

“Coach gave me the head nod and just told me he had confidence in me when I was out there,” Taylor said. “I just took off.” After sophomore Zack Burdi held the Cats at bay in the top of the tenth, White – who has been involved in countless walk-off situations this year – singled to the shortstop and advanced to second on a throwing error by Heady.

“I was definitely ready to hit a fastball,” White said. “I felt like it was coming, like it was only a matter of time, just put a couple of hits together. We were able to rally together.”

Tiberi, pinch hitting for freshman Ryan Summers, then smoked a pea to center field to bring White home for the walk-off run.

“He threw me a good curve ball, I just stayed on it,” Tiberi said. “It’s not easy coming off the bench, I just tried to stay in the game and stay focused.”

Burdi picked up his third win of the season in 1.0 innings pitched.

RHP Zach Strecker, RHP Spencer Jack, and LHP Zach Logue all pitched in relief in what was an impressive performance overall by Kentucky on the mound.