BATON ROUGE, La. – No. 1 ranked LSU (37-7, 14-6 SEC) head Coach Paul Mainieri told College Baseball Central in an interview Tuesday that coming into the 2015 college baseball season he would be counting on his young pitching staff, and that he was comforted by the fact his veterans would step up.

“I am really proud of our team and the way they have performed this year,” Mainieri told College Baseball Central. “We knew going into the season that we had a very veteran group of position players. But we also had a very young pitching staff. The fact that we had a veteran lineup gave me a little bit of comfort knowing we were going to count on the young arms.”

The veteran lineup is raking, and the production that has been given through their hard work and approach is unparalleled.

Led by senior backstop Kade Scivicque, who is batting .380 (leads the team) with 13 doubles, five home runs, 32 RBIs, and 22 runs scored, the Tigers are first in the SEC in team batting average (.320), and second in the nation. A look at the combined effort of this team leaves one astounded.

Joining in the symphony of offensive attack is junior first baseman Chris Chinea, with a .351 average to go along with his 11 doubles, six home runs, and 37 RBIs. And what might be the biggest surprise, Conner Hale, who replaces last year’s shining star Christian Ibarra at the hot corner, and has 12 doubles, two triples, four home runs, and 37 RBIs to go along with his ravishing .335 batting average.

“Chris Chinea has been a part-time player for the first couple of years,” Mainieri told CBC. “This is his first opportunity to play every game and he has not disappointed. He has been a real force in our lineup, hitting the ball with power and hitting the ball in the clutch. We were concerned about third base when we moved Conner Hale over to third base, and he has given us a really solid defender there. He’s not as flashy as Christian Ibarra had been for us the last couple of years, but he has been steady and that’s really what we were looking for.” 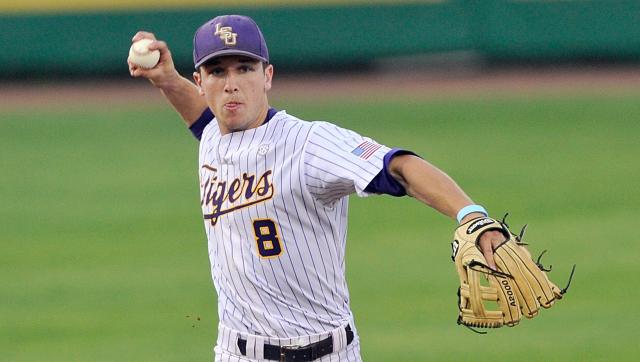 Junior shortstop Alex Bregman might be one of the most gifted players in college baseball period. The ice-veined Bregman not only provides stellar defense, but at the plate is one of LSU’s most feared hitters. Batting .335 with 15 doubles, three triples, eight home runs, and 36 RBIs, Bregman is the 26th toughest to strike out player in the nation. In 44 games he has 173 at bats and has only struck out 12 times, giving him a 14.4 K AVG.

“It’s really hard to do interviews about Alex Bregman because you don’t have enough time to talk about all the quality’s he has,” Mainieri told College Baseball Central. “He is just simply as great a player as you could ever hope to have. Not just because of his on-the-field ability, but also the way he carries himself, his influence on the team as a leader, his off-the-field way that he conducts himself with the fans, his team first attitude. You add all that stuff together along with his tremendous skill and ability, and you will never have a better college baseball player.”

Against Texas A&M, five players hit .400 or even better. Designated hitter Chris Sciambra, leftfielder Jake Fraley, Bregman, and Chinea all hit for a .417 average during that series.

The Tigers made the Aggies – who have the best pitching staff in the SEC (2.47 ERA) – pay dearly as they pounded out 35 hits while batting .330 as a team over the series against the No. 2 ranked team in the nation.

However, the young guns that stand on the mound, Mainieri mentioned, have done their part to help this Tiger team ascend to the top of the nation.

Freshman sensation Alex Lange, an RHP, has a 1.86 ERA (2nd SEC), and his 72 strike outs is fourth in the SEC. He is sixth in strikeouts per nine innings (10.29), and is 11th in the conference in hits allowed per nine innings (7.29).
Lange is tied for first in the SEC with teammate sophomore LHP Jared Poche in wins (7), and freshman RHP Jake Godfrey’s six wins is sixth in the conference. So the pitching staff is pulling their weight to say the least.

“Alex [Lange] is one of the special young men that come into your program and you are just really grateful that you have him,” Mainieri told CBC. “He is a lot like Bregman in a sense that the talent is obvious. He’s got a great arm, he’s got an outstanding curve ball, good command, and he’s got all of the tools that you need to be an outstanding pitcher. But he is so much more than that. First of all he is very intelligent. He knows what he has to work on to get better and he does it. He’s like the coach’s dream.”

Heading down the stretch here in the last month of the college baseball season, LSU will be facing more huge games – like the Texas A&M series. Making sure that your team maintains focus is crucial in the latter part of the regular season as well as the post season.

Will LSU be able to finish strong?

“The thing that we are really fortunate about is that we have a lot of history and tradition here at LSU,” Mainieri said, “We have played in a lot of big games through the years. In my nine years here we have probably played fifty games against teams ranked in the top 10, or maybe a hundred and fifty games against teams ranked in the top 25. When you play at LSU you are constantly under the microscope, you’re in a fish bowl here. There are ten to twelve thousand fans in the stands, your games are on national television, the stakes are always very high, the expectations are high, and so you learn to deal with that kind of pressure. The bigger the situation the calmer they become.”