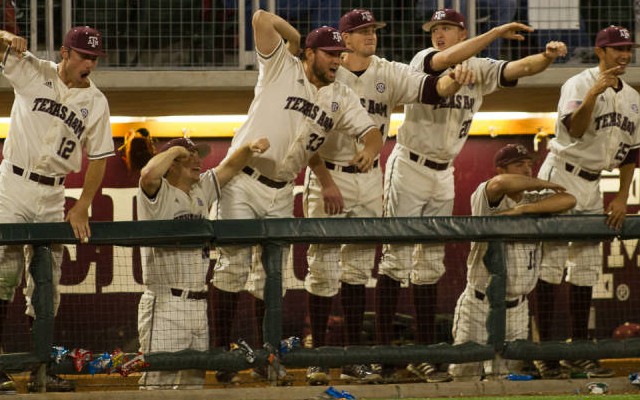 HOOVER, Ala. – Sophomore right-hander Geoffrey Bramblett (4-1) allowed an earned run over seven solid innings of work to make a four-run first inning by the Alabama Crimson Tide (13-9) offense stand as the tide handed the No. 5 Texas A&M Aggies (24-1) their first loss of the year by a 6-2 final at Hoover Met on Saturday.

The win split the double-header as the Aggies had already won the first game with a five-run 10th inning to improve to 24-0 and set the SEC record for longest winning streak, taking down the 2008 LSU Tigers’ mark of 23.

The loss didn’t come in a game that had everything go right for the Tide or everything go wrong for A&M. Actually, Alabama committed four errors to the Aggies’ one and only outhit the No. 5 team by one.

Aggies starter Turner Larkin had been outstanding coming in (2-0, 2.33) with 27 strikeouts in 27 innings and opponents hitting .267 against him. But on Saturday the 6’3” 200-pound freshman got tagged early and chased after recording only two outs having given up four hits, including two doubles and a triple, against the first six batters he faced and trailed 4-0.

On the other side was Bramblett, who limited the damage that four errors can cause and got a couple of timely double-play balls to stop early rallies as he held the Aggies offense in check, spreading out seven hits and three walks to allow just two runs in the game.

It was a given with the gritty grind that is the SEC slate of top competition (currently five teams in the top 10) that the Aggies would lose a ball game. I mean, seriously, this is baseball. So many things can happen in each and every game that it just isn’t possible to go unbeaten over the 56-game regular season.

Yet the Aggies made it almost half-way through without dropping a contest. That should sound out pretty saliently about just how impressive this opening stretch has been for the squad from College Station.

No one would argue that the Aggies have been the most challenged with a strength of schedule at 183 according to the folks at Boyd’s World. But we must give credit where it is due, 24-straight wins is an amazing accomplishment.

Every team hits the doldrums or slumps or battles with illness, injury and family issues that become distractions. Yet, so far, the Aggies seem immune to the common maladies that restrict success on the ball field.

Maybe one of those free ice cream tours that are pretty popular in that area is in order?

On Saturday, the Tigers imposed their will on a Razorback team with their staff ace on the bump in junior right-hander Trey Killian (0-1, 2.16 ERA, .228 OBA). LSU jumped to the early lead as senior left fielder Jared Foster slapped his fifth homer on the season, a solo shot, over the left-field wall in the third. Mark Laird (Jr., RF) would add another run with an RBI single to grab the 2-0 lead for the Tigers.

After an RBI double off the bat of Tigers junior slugger Alex Bergman (SS), the Hogs would finally plate a single run against LSU freshman righty Jake Godfrey (5-0, 2.25 ERA, .246 OBA) to pull within 3-1.

Then the Tigers solved the riddle of Zach Johnson from Thursday night as the Laird-Bergman duo struck again in the seventh inning. Laird singled to left scoring Jake Fraley (So., LF) and Bergman’s sac fly scored Chris Sciambra (Sr., DH) to extend the Tigers’ lead to 5-1.

The Hogs cut the lead back to 5-3 on a two-run homer by senior left fielder Joe Serrano (2) in the home half of the frame and would load the bases looking for more only to have Tigers’ reliever Collin Strall (So., RHP) get Carson Shaddy (Fr., C) to ground into the inning-ending, 5-2-3 double-play.

After Arkansas pulled within a run in the eighth, LSU would tack on two more runs in the ninth as Connor Hale (Sr., 3B) homered (3) to the power alley, scoring Bergman, to extend the lead to 7-4.

The Tigers continue to show the mettle necessary to be the nation’s top team and haven’t really been out of a game in their losses. What you do see on the field is a team that is well-rounded offensively and defensively that gets great pitching which gives them the ability to manage the game and decide the outcome.

OXFORD, Miss. – Just when everyone was ready to write-off the championship potential in Oxford, Mississippi, the Ole Miss Rebels (13-10) took 2-of-3 from the No. 1 Florida Gators (20-5) with a double-header split on Saturday after capturing game one on Friday at Swayze Field this weekend.

Ole Miss dropped their SEC opening series to LSU 2-1 after an 18-6 pummeling on Sunday by the boys from the swamps of Baton Rouge. With an equally talented squad from the swamps of Florida coming to town things looked foreboding in Mississippi.

However, the Rebels made the formidable Gators starter Logan Shore (So., RHP) take an early, fourth-inning exit on Friday night in a 4-1 win and then chased Florida starter AJ Puk (So., LHP) from Saturday’s first game of the double-header with one-out in the third, having surrendered five runs, on route to a 5-2 win to clinch the series.

The Rebels are definitely alive and serve as another example of just how tough winning on the road in the SEC can be. The Gators will chalk this up to just that as they prepare for Alabama next weekend. In case you missed it, Alabama just ended Texas A&M’s season-opening winning streak at 24 games.

Florida’s bats, after unloading 14 runs on 16 hits in a midweek win over No. 15 Florida State managed only three runs on 11 hits in the first two games of this series against Rebels’ hurlers. COLUMBIA, Mo. – The Missouri Tigers (18-5) remain unbeaten in SEC play, and this time they brought the drama with them as they downed the No. 8 South Carolina Gamecoks (17-6) on a walk-off win in the 10th inning. Freshman Trey Harris (DH) drove a two-out, walk-off, RBI single to center that scored Ryan Howard (So., SS) as the Tigers stole the game and clinched the series.

Just a game after Missouri starter Reggie McClain (Jr., RHP) dominated the Gamecocks allowing two earned runs over 8.1 innings, the Gamecocks looked poised to return the favor as Jack Wynkoop held the Tigers scoreless through six. But the Tigers’ offense was able to scratch together a run in each the seventh and eighth inning to tie the game at 2.

South Carolina struck first in the 10th inning, as senior Elliott Caldwell (LF) drove in senior Connor Bright (RF) who led the inning off with a single to grab the 3-2 lead. Gamecocks head coach Chad Holbrook handed the lead to closer Taylor Widener, looking for his seventh save on the year.

The Tigers had other ideas, as sophomore center fielder Jake Ring led off the home half of the frame with a single and Howard followed with a double to put two runners in scoring position. Josh Lester’s (Jr., 3B) sac fly scored Ring but a pop out by Brett Bond (Fr., C) left Howard at second with two-outs.

Harris would come up big for Missouri as the Tigers are trying to fit in among the best in D1 baseball after being surprisingly swept at home by the solid mid-major Milwaukee Panthers just two weeks ago. Suddenly, this spunky bunch has won five-straight games in the SEC and is looking to sweep a Top 10 team with a win on Sunday.