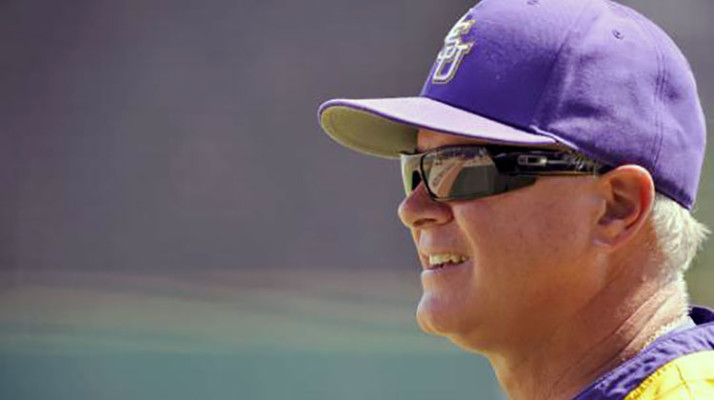 HOOVER, AL – The 2014 SEC Tournament came down to a pair of teams that may very well end up being two of the eight national seeds come Monday afternoon, after NCAA Tournament seeding is announced. Those two teams are the Louisiana State Tigers and Florida Gators, who put on a rather impressive display of pitching and defense Sunday afternoon – but timely hitting in the top of the eighth inning proved to be the advantage for the Tigers.

Florida sent redshirt junior Karsten Whitson to the mound, who has been up-and-down in his return from shoulder surgery that cost him all of 2013. Whitson got off to a good start, relying primarily on his heater in the top of the first. He ran his fastball up to 96 mph and pounded the zone effectively, getting both Mark Laird and Alex Bregman to ground out to second to open the inning. Jake Fraley worked a seven-pitch at-bat into a walk, but Whitson battled back to get Sean McMullen to fly out to left to end the inning.

Not only was his stuff working for him, but his defense was in prime form as well. The Gator infield fielded all eight groundouts up to this point rather cleanly, including a pair of plays that saw Josh Tobias flash some impressive leather – a diving stab on a Hale grounder to end the second and a solid knock down play on a Scivicque grounder in the fourth.

But perhaps most impressive of all was Harrison Bader’s run-saving catch in center to end the top of the fourth. With McMullen on second, Moore drove the first pitch he saw to deep left center, but Bader was on the ball from the get-go, tracking it down and diving for the inning-ending grab.

After getting out of a bases loaded jam in the top of the sixth, it is safe to say that the Tigers were seeing the Whitson of old – the type of pitcher that can light it up with his tight, late-breaking slider that can miss bat barrels with the best of them.

But after hitting Moore on the shin to open the top of the seventh, Florida head coach Kevin O’Sullivan pulled Whitson from the game in favor of junior right-hander Ryan Harris. Harris retired the next three batters in order to end the inning, but the right-hander would find trouble in the top of the eighth.

Although Harris got Laird to fly out to center after a six-pitch at-bat, Bregman followed and brought with him momentum. Bregman took a 1-0 pitch to left for a base hit, but after a number of throw-overs to first was picked off by Harris – but his tenacity fueled the Tigers. With Fraley still at the plate, the freshman singled to left center and later stole second with McMullen at the plate.

With two outs and a 3-2 count, McMullen jumped on a fastball left hanging by Harris and sent it to right for a two-run home run, putting the Tigers on the board with a two run lead.

As much as Bregman ignited what would be the lone offensive attack by the Tigers (and by either team for that matter) at the plate, he dazzled with his glove in the field. In the bottom of the seventh, Bregman displayed impressive range, pivoting skills, and arm strength on a ground ball up the middle by Gushue.

Again, Bregman flashed his glove, this time in the bottom of the eighth on a ground ball by Buddy Reed, wherein he made a backhanded stab and threw a bullet of a throw to first in time for the out. He finished off the afternoon by starting a 6-4-3 double play in the bottom of the ninth, once again displaying great footwork and solid instincts.

Despite the lack of overwhelming offense on either side, the Tigers made up in terms of prime defense, timely hitting, and the ability by starter Alden Cartwright and the relief trio of Nate Fury, Zac Person, and Kurt McCune to hold the Gators’ offense to just two hits on offense – a bullpen that finished off the SEC Tournament having retired 24 of 28 batters faced.

McCune entered the bottom of the ninth to close out the game, and after surrendering a leadoff walk to Casey Turgeon, the right-hander got Richie Martin to ground into a double play and Bader to ground out to first to end the game and seal the SEC championship for the Tigers.

With the 2-0 victory, the Tigers secure their league-best 11th SEC Tournament championship and extend their winning streak to eight games. Coming into Sunday’s contest, the Tigers had outscored their opponents by a combined score of 85-8 and boasted an impressive team batting average of .388.