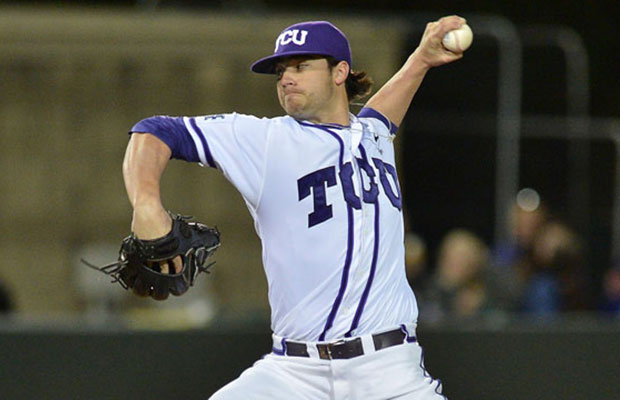 OKLAHOMA CITY, Okla. - Tanner Kreitemeier lead No. 7 Oklahoma State to two wins over No. 20 Texas with game-winning hits in each game as the Cowboys advance to the Big 12 Title Game from the loser’s bracket with 3-1 and 6-4 wins over the Longhorns. Kreitemeier hit an RBI single in the eighth in game one to take a 2-1 lead and then hit a two-run single in the eighth in game two to give the Cowboys a 5-4 lead as he combined for a 3-for-8 day.

Connor Costello helped the game two effort with a two-run homer for Oklahoma State while Blake Battenfield pitched three scoreless innings in relief to get the win in game one and Brendan McCurry pitched a perfect ninth for his 18th save.

Brandon Finnegan, Trey Teakell and Riley Ferrell combine to strike out 11 hitters and allowed only an earned run as No. 19 Texas Christian downs Baylor 4-1 to advance to the Big 12 Championship Game. Finnegan struck out seven while Teakell moved to 5-0 and Ferrell snagged his 13th save in the winning effort.

Kevin Cron led the Horned Frogs’ offense with three hits, two RBI and a run scored which include the go-ahead RBI single in the seventh.

The winner between TCU and Oklahoma State will likely hold a National Seed in the NCAA Regionals.