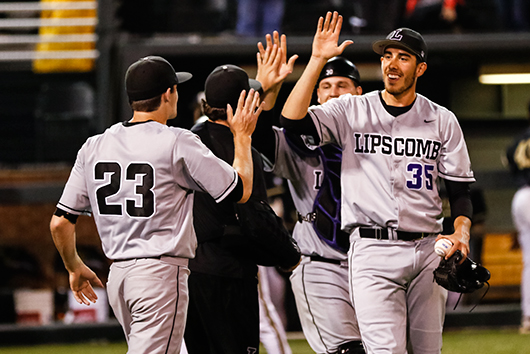 Midweek mayhem strikes again as Wednesday night capped off a midweek of bizarrely intriguing action that saw three teams in the College Baseball Central Top 25 fall in upset while a pair of Top 25 teams squared off. Couple that with a Tuesday night slate that saw a no-hitter, two teams scoring 20 runs in a game and a player going long four times in a game along with Top 25 matchups and it’s safe to say that we’ve had quite an impressive midweek.

Toss in a pinch of No. 1 Vanderbilt being an upset victim and that one of the teams that scored 20 runs just happened to also be a Top 25 squad competing in one of the oldest rivalries in the game and you have quite possibly the most spell-binding midweek of the year to this point.

Six-foot-eight-inch freshman hurler Brady Puckett held the nation’s top team to a single earned run over seven-and-one-third innings of work as the Lipscomb Bison ended Vanderbilt’s winning streak at six games with a 3-1 upset. Puckett struck out six and scattered five hits and a pair of walks in the win. Right fielder Josh Lee was the offense for the Bison with an RBI sac fly in the first, an RBI triple in the sixth and an RBI single in the eighth in building a 3-0 lead.

Vandy attempted a late surge as Jason Delay led off the eighth with a double before and would score on a double by Zander Wiel to pull within 3-1 with two-outs and the tying run on base. Nick Andros struck out Bryan Reynolds to end the threat and pitched a perfect ninth for the save.

Vanderbilt is a riddle, wrapped in a mystery, inside an enigma against low RPI teams. Almost half of their losses have come against teams with an RPI ranked 100 or more (Santa Clara 176, Indiana State 145, Lipscomb 135).

As for Lee, he was originally recruited and played at Vandy in his freshman year before transferring out to JUCO ball and eventually on to Lipscomb.

The CBC Top 25 suffered upsets on Wednesday with a pair of one-run decisions and a blowout loss. The No. 7 Arizona State Sun Devils jumped to a 5-1 lead with a four-run, second-inning rally only to watch it evaporate as the UNLV Rebels took a late lead with a three-run, seventh-inning rally and held on for a 7-6 upset win.

Sun Devil Andrew Snow led the second-inning rally with a two-run single but the Rebels scored twice on a throwing error by ASU third baseman David Greer to tie the game in the seventh and took the lead on an RBI double off the bat of AJ VanMeetren. The game took two days because a lighting issue at Wilson Stadium. The Rebels haven’t defeated a top-five team since 2003 while the Sun Devils have now played in 15 one-run games this season going 10-5.

The No. 19 Iowa Hawkeyes lost a 4-3 decision to the Milwaukee Panthers in a game that saw 18 pitchers pitchers with three pitchers throwing 1.1 innings and one pitcher tossing only 0.1 innings on a definitive bullpen night on the bump. Iowa scored three runs on two errors as the Panther staff didn’t allow an earned run on the day as catcher Mitch Ghelfi drove in three of Milwaukee’s four runs. Milwaukee isn’t new to road upsets having swept a series at No. 25 Missouri earlier this season.

Just a day after bouncing West Virginia 12-7 the No. 13 Maryland Terrapins got bounced by the George Washington Colonials 12-1 on the pitching of seven hurlers and two four-run innings. The Colonials jumped to an early 5-1 lead after a four-run, third-inning rally helped by a pair of Terps errors and then closed out with another four-run rally in the ninth on a couple more errors with half their runs on the day being unearned on five Maryland errors.

Fans witnessed a Bedlam blowout of epic and historic proportions as the No. 17 Oklahoma State Cowboys scored more runs than any prior OSU squad in Bedlam history in a 24-2 win over the Oklahoma Sooners. However, the Cowboys have twice scored 23 against their rival, most recently in 1987 and before in 1952. The 22-run win was the largest margin of victory in the history of Bedlam as the Pokes had 20 hits and nine walks with Tim Arakawa and Conor Costello each driving in four runs while Bryan Case, David Petrino and Jon Littell each scored four times. Petrino also had four hits in the game. Battles among Top 25 squads finished with split results with the No. 2 Texas A&M Aggies coming from a 3-1 deficit to defeat the No. 14 Rice Owls 4-3 and the No. 12 UC Santa Barbara Gauchos upsetting the No. 8 USC Trojans 2-1. Gauchos lefty Domenic Mazza improved to 4-0 tossing seven shutout innings against the Trojans while the Aggies got a pair of seventh inning homers from JB Moss and Logan Nottebrok to tie the game at three before Ronnie Gideon drove in pinch runner Matt Collins with a two-out single in the ninth for the go-ahead score. Both games witnessed perfect ninth innings from closers as USCB’s Robby Nesovic notched his third save and TAMU’s Mark Ecker snagged his fifth.

Left fielder Harrison Bader went 3-for-5 at the dish with a run scored and four RBI and his ninth homer of the year but the bigger story in the game was catcher JJ Schwarz’ four-homer day at the plate as the No. 9 Florida Gators blew out Stetson 22-2. Schwarz nearly doubled his home run total on the season and is now tied with Bader while also driving in 10 RBI on the day. Schwarz hit a two-run homer in the second and third, a three-run shot in the fourth, and a solo dinger in the seventh before capping things off with a two-run double in the eighth while working in a fly out in the fifth. Glad to see he’s still human.

On Tuesday night Bryant Holtmann tossed eight scoreless innings and Alec Byrd threw a perfect ninth as the No. 11 Florida State Seminoles defeated the Florida Gulf Coast Eagles 5-0. However, on Wednesday Eagles’ throwers Nick Deckert, Jordan Desguin and Adam Eggnatz combined to shutout the Seminoles 5-0 to earn a split of the midweek series. Josh Delph and DJ Stewart led the Noles with a pair of three-hit days with Delph scoring twice and driving in a run in the FSU win. The Eagles were led by Nick Rivera who hit a solo homer while adding another run scored twice and an RBI in their win.

Infielder George Iskenderian hit a one-out, walk-off single in the 10th inning that scored Ricky Eusebio to give the No. 10 Miami Hurricans a 4-3 win over the No. 22 Florida Atlantic Owls on Wednesday. The Owls shot out to a 3-0 lead with a three-run fifth led by Sanger’s two-run double. But Miami hit back with a three-run, sixth-inning rally of their own helped by a pair of FAU errors to tie the game a 3-3. Both pens responded and kept the game tied into extras when the Canes broke through. Hartford hurlers Ben Brown, Jake Regula, Justin Robarge and Kevin Tise combined to no-hit Sacred Heart on Tuesday in a 10-0 win for the Hartford Hawks. Brown got the start and walked one over two innings, Regula would get the win while tossing three and Robarge and Tise each tossed two innings with two strike outs each. It was the first no-hitter for Harford since Sean Newcomb no-hit Yale on March 24, 2012.