Being top-ranked in college baseball can be such a fickle mistress as many top-ranked teams discovered on Saturday. How else do you explain the plethora of upsets that seemed to dominate the College Baseball Central Top 25 landscape? Fortunately, some of these teams have the opportunity to keep from losing their series with wins on Sunday.

However, for others like the No. 1 Vanderbilt Commodores, No. 11 Florida State Seminoles, No. 14 Rice Owls and No. 18 UCF Knights the series have been lost and these squads are either looking to salvage a win (FSU, Rice, UCF) or are hoping for losses by others (Vanderbilt) to limit the damage the series loss will cost in the race to stay on top of the Midseason College Baseball Regionals Projections.

What better way to solidify your place in the College Baseball Central Top 25 than to pick up a road series win in the SEC in your inaugural week in the poll? That’s just what the No. 25 Missouri Tigers did as they blasted the Tennessee Volunteers 10-1 behind a stellar outing by junior Peter Fairbanks. The huge 6’ 6”, 225-pound righty struck out 11 Vols and allowed only an earned run while spreading them thin to only five hits and a pair of walks over seven innings.

Missouri dropped game one of the set 5-2 but rallied to outscore the Vols 18-4 over the final two games to clinch the series. On Saturday Case Munson and Jack Klages went deep in back-to-back fashion in the four-run fourth inning that made the difference for the Tigers.

What worse way to solidify your place in the College Baseball Central Top 25 than to drop a home series against a sub-.500 SEC squad after you take that spot in the poll? That’s just what the No. 1 Vanderbilt Commodores did as they dropped a second-straight, one-run decision to the Ole Miss Rebels in a 5-4 loss on Saturday. The Rebels did a number to Vandy pitching over the ninth inning of the last two games by loading the bases in each game then getting a Colby Bortles grand slam on Friday night and a two-run single by Errol Robinson on Saturday to claim the series.

“A series loss like this really hurts Vanderbilt in their case to maintain a College Baseball National Seed even though we know they are solid and worthy, their inconsistency doesn’t merit that award if it continues.” – Realist Ray, College Baseball RPI Analyst

Talk about flipping the script in a hurry! On Friday night the No. 4 UCLA Bruins grabbed an early lead and cruised to a 9-3 game one win only to watch the No. 8 USC Trojans return the favor on Saturday as the Trojans took a 5-0 win at Dedeaux Field in the same manner.

USC jumped to a 2-0 lead on a two-run double off the wall in right-center by senior second baseman Dante Flores. In the Trojans’ next at bat, the Needles, California-slugger Bobby Stahel hammered his second homer in as many nights against Bruins’ pitching as he put a Grant Watson fastball over the bullpen in left, a two-run shot, to extend USC’s lead to 4-0.

Twomey improved his ERA to 1.79 on the season and is 6-1 on the year while leading the Trojans with 55.1 innings pitched.

“I’m very impressed with the campaign Bobby Stahel is putting together. He’s not a monster, five-foot-10 and 190 pounds but has a remarkable slash .437/.615/.459 and leads the Trojans in runs (35), hits (59) and triples (4) while he’s second on the team in homers (3), doubles (7) and RBI (25). He is a monster in this lineup out of the lead-off spot because he’s the guy the opposing pitcher is going to see the most!” – Literal Larry, College Baseball RPI Analyst

Just when we thought the Notre Dame Fighting Irish were dead in the water, they chose to show us they still have life and may be ready to make a run and hold their spot in the Midseason College Baseball Regionals Projections. The Irish have swept the first two games of their series with the No. 11 Florida State Seminoles on the back of twin solid pitching performances.

The Tar Heels appear to have needed their backs to the wall to respond and get their season back on track because they have now won five straight games after most had written their season off after a series loss at Clemson last weekend. The North Carolina Tar Heels dropped their in-state rivals, the North Carolina State Wolf Pack by one-run for the second straight night with a 3-2, walk-off, series-clinching win on Saturday. 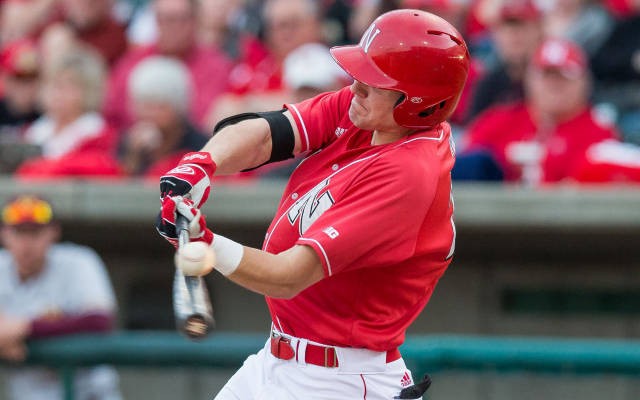 The No. 13 Maryland Terrapins had been running through the Big 10 until the No. 19 Iowa Hawkeyes found a way to beat them in a 3-1 win on Saturday to even the series at a game each. Blake Hickam held the Terps to a single run over 6.2 innings and closer Nick Hibbing shut them out over the final 2.1 innings for the win.

After suffering another setback with a home shutout loss to the Minnesota Golden Gophers on Saturday, the No. 23 Nebraska Cornhuskers responded, led by Ryan Boldt, with a 7-4 win to knot the series. Boldt went 2-for-3 with three RBI and a pair of walks, reaching base four times on the day to end their four-game conference losing streak.

Big 12 Baseball: No. 3 TCU Evens Series On Road With Four-Hitter

Teams jockeying to stay in the College Baseball National Seeds Projections aren’t immune to losing, but they are expected to respond emphatically when they do. The No. 3 TCU Horned Frogs did just that after an embarrassing 14-4 series-opening loss to the Kansas State Wildcats, the Frogs turned it around to tie the series at a game each with a 9-0 win on Saturday.

Preston Morrison tossed a complete-game, four-hit shutout in game two in typical Morrison fashion. The 6’ 2” 185-pound senior dominated K-State, needing just 115 pitches and surrendering only a pair of walks while striking out six. Nolan Brown’s two-run double in the eighth keyed a six-run rally as TCU extended a 3-0 lead to 9-0 and put the game out of reach. Cody Jones had two hits and scored twice while Derek Odell knocked in three runs for the Frogs. Most are surprised to see the American Athletic Conference as the No. 4 ranked RPI conference in the country. Even more are surprised that at this point in the season that neither UCF nor Houston is leading the league. Instead the South Florida Bulls have opened up a two-game lead over Memphis and Connecticut atop the league with Houston three-games back and UCF trailing by four with a below-.500 conference mark.

The Bulls have jumped all over the East Carolina Pirates to take their weekend series after two games by a combined score of 12-1. On Friday night, Team USA hurler Jimmy Herget allowed an earned run over eight with nine strike outs in a 2-1 win and then Saturday Casey Mulholland tossed eight scoreless while striking out 10 in a 10-0 route to clinch the series.

The Connecticut Huskies drubbed the No. 18 UCF Knights for a second straight win by a 15-1 final score to steal the road series from the pre-season conference favorite. Anthony Kay threw a complete game with nine strikeouts for the Huskies who pounded out 17 hits with Vinny Siena, Bryan Daniello and Willy Yahn each having three-hit days at the dish. Daniello hit a two-run homer on a three-runs-scored, three-RBI day and Max McDowell added a three-run blast in the blowout.

“We may be looking at the dawning of a new day in the American Athletic Conference in regard to the Midseason College Baseball Regional Projections as UCF’s current slide has dropped it’s RPI to 53. However, South Florida has the top-ranked RPI in the conference at 19 with Houston next at 31 and Connecticut at 35 as the race for the conference is heating up.” –Literal Larry, College Baseball RPI Analyst

It is inexplicable how the No. 14 Rice Owls have played in a road series this weekend at the UAB Blazers. We knew the Blazers weren’t a pushover, but they have dominated this match-up so far this weekend with a 4-0 one-hitter on Friday followed up with a 14-4 beat down on Saturday.

UAB pounded out 14 hits with a pair of fifth-inning, two-run homers by Griffin Gum and Adam Smith as each drove in three runs and Nathan Vincent hit a three-run triple on a four-RBI day at the plate as the Blazers whipped Owls’ pitching to take the series win.

The Dallas Baptist Patriots took the opening game of a double-header with the Bradley Braves 16-7 on Saturday to clinch the series win and remain as the No. 1 ranked RPI team in the country. The Braves did respond with an 11-6 win in game two in avoiding a sweep to keep their RPI elevated at No. 9. The Missouri State Bears took extra innings to take the series over the Evansville Purple Aces with a 7-5 win just one day after a 13-2 run-rule pasting of the Aces in the opener. Missouri State now has the No. 8 RPI in the land. The No. 12 UC Santa Barbara Gauchos have won nine straight and 13-of-14 after clinching the series win with a 3-2 win over the Cal State Northridge Matadors on Saturday. Senior Cameron Newell broke open a 0-0 game with a three-run, eighth-inning homer to give UCSB a 3-0 lead. Justin Jacome tossed eight scoreless before giving up an RBI double in the ninth to Justin Toerner. Robby Nesovic allowed Toerner to score on a Ryan Raslowski single before striking out two of the next three hitters to close out the win.

“The Gauchos are making a solid case to jump into the next College Baseball National Seeds Projections with a win this week over USC, a 10th ranked RPI and this long winning streak which is a total turnaround from where this squad was a season ago.” – Realist Ray, College Baseball RPI Analyst

Just like that the UC Irvine Anteaters have won 15-straight ball games and 18-of-19 overall after a 10-4 dismantling of the Long Beach State Dirtbags. Matt Esparza allowed an earned run over six and Cameron Bishop drove in three-runs as UC Irvine remained unbeaten at 8-0 in the Big West with a 2.5 game lead over the Gauchos.

The St. John’s Red Storm have grabbed the early Big East Conference lead after a pivotal series win over the Seton Hall Pirates with a 7-4 win on Saturday. Creighton is just a game back after clinching their series with the Xavier Musketeers with a 6-1 win.

The No. 21 Nevada Wolf Pack fell out of first place in dropping a 14-10 decision to the Fresno State Bulldogs to even their series because the simmering hot San Diego State Aztecs clinched their series with the San Jose State Spartans with a 6-1 win on Saturday.