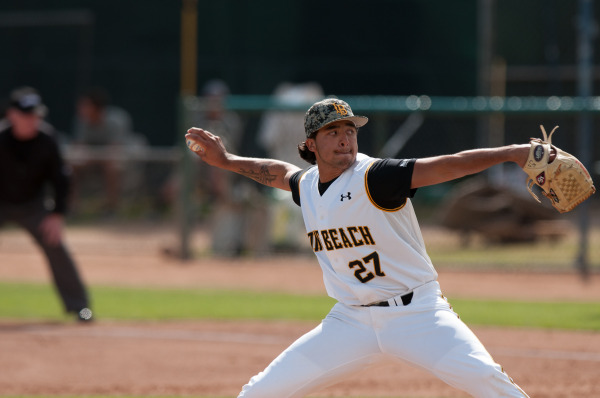 One year after making a feverish run into a regional with a late-season push to the finish line, Long Beach State fell back to the pack in 2015 and finished just 28-26 overall.

Understandably, they didn‚Äôt receive a ton of attention on a national scale, but that‚Äôs a shame because the performance of Chris Mathewson, in just his freshman season, was lost on many.

The Big West is a tough league, but Mathewson handled it well in his first season on campus, going a tough-luck 6-6 with a 1.94 ERA. In 93 innings of work, he struck out 80 and walked 24, with opposing batters hitting just .187 against him.

That‚Äôs a pretty stout performance for a freshman, and he likely would have been even more of a workhorse had he not been coming off of meniscus surgery prior to the season. There were times when head coach Troy Buckley was conservative with his innings and pitch counts, most notably in a game against Wichita State on March 1. On that Sunday, Mathewson started things off by throwing seven no-hit innings against the Shockers, with eight strikeouts. Rather than let him come back and try to finish off the no-hitter, though, Buckley removed Mathewson after seven innings, and the freshman watched as Darren McCaughan completed the no-no.

After the season ended, accolades were quick to follow. He was named the Big West Freshman Pitcher of the Year and a member of the All-Big West First Team. Additionally, he was named a¬ÝFreshman All-American by Collegiate Baseball (Louisville Slugger), the NCBWA, Baseball America, and D1Baseball.com.

Heading into the 2016 season, he‚Äôs already been named a preseason All-American by Collegiate Baseball, and the Dirtbags will likely need him to at least come close to replicating his 2015 success if they are going to bounce back and get back into the regional mix in 2016, as Mathewson‚Äôs rotation mate Kyle Friedrichs (6-4, 2.79) has moved onto pro ball.