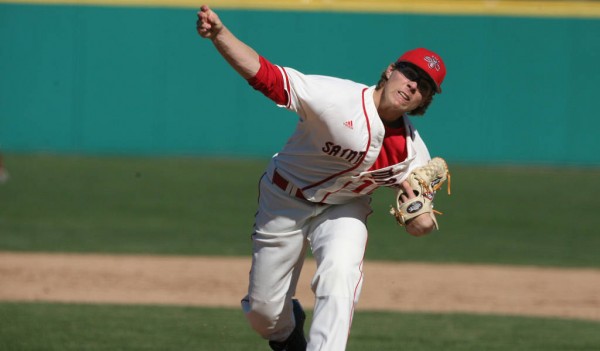 If you haven‚Äôt heard of Corbin Burnes to this point, you are forgiven.¬ÝBurnes had a very solid sophomore season after a bit of a rough introduction to Division I baseball as a freshman, and he had a lot to do with his St. Mary‚Äôs team showing big improvement in 2015 when compared to 2014. But, with all that being said, his numbers weren‚Äôt eye-popping and St. Mary‚Äôs still wasn‚Äôt a program at the forefront of the national discussion, despite their improvements.

As we head into 2016, with Burnes soaring to the top of prospect lists and poised for a big junior campaign, there is little to no excuse for not being well-acquainted with the burgeoning ace.

Certainly, his aforementioned sophomore season helped him become more of a household name. As a weekend starter for the Gaels, he went 7-5 with a 3.74 ERA. In 89 innings of work, he struck out 91 and opposing batters hit just .230 against him.

It was after the season, though, that his prospect status really took off. As a member of the Orleans Firebirds in the Cape Cod League, Burnes showed that he belongs among the nation‚Äôs elite. He went 5-3 with a 3.79 ERA as one of the team‚Äôs primary starting pitchers, but just as impressive was the stuff he showcased, including a fastball that reached 96 mph.

The bottom line is this: even if St. Mary‚Äôs isn‚Äôt any more of a nationally-recognized program in 2016 and Burnes isn‚Äôt a name that rolls off the tongues of college baseball fans as easily as, say, A.J. Puk or Alec Hansen, there is no real excuse for not being well aware of his vast potential.