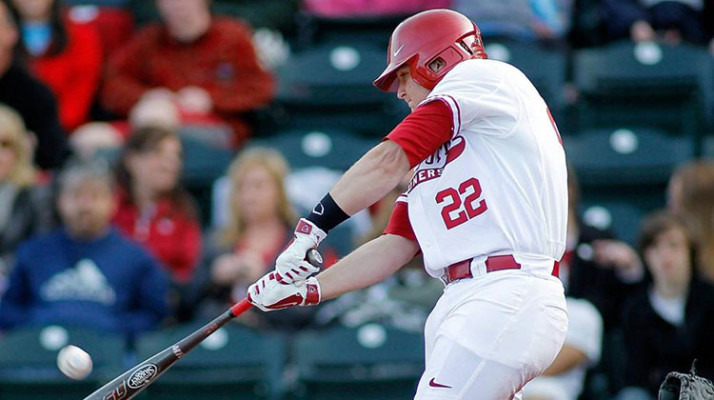 OKLAHOMA CITY, Okla. - Sheldon Neuse hit a two-run, walk-off single in the bottom of the ninth that scored Craig Aiken and Kolbey Carpenter to complete a comeback from a 7-1 deficit as defending tournament champion Oklahoma staves off elimination from the Big 12 Conference Tournament with a 9-8 win over No. 23 Texas Tech. Neuse drove in four runs and Aiken scored twice and drove in three runs and Carpenter scored three times in the winning effort that knocked the Red Raiders from the tournament. The loss may have hurt hopes of Texas Tech hosting an NCAA Regional with a 16 RPI.

Dillon Peters and Parker French combined on a five-hit shutout as No. 20 Texas defeated No. 7 Oklahoma State 3-0 on Thursday. Kacy Clemons hit a pair of RBI singles to provide the Longhorns with all the offense they would need as they continue their quest to host a regional. The loss hurts the Cowboys chances of hosting a regional with a 22 RPI.

Preston Morrison threw a complete game allowing two earned runs on seven hits and a walk while striking out six as No. 19 Texas Christian drops West Virginia 6-2 on Thursday. Garrett Crain and Jerrick Suiter each drove in two runs to lead the Horned Frogs’ attack as TCU continues their quest for a Big 12 crown and a shot at a National seed with an 11 RPI.

Lawton Langford drove in a run and scored another in a four-run third inning that provided Baylor all the runs they needed as the Bears pull off a 4-3 win over Kansas eliminating them from the Big 12 Conference Tournament on Thursday. Drew Tolson allowed three runs over six innings and the pen held the lead with Josh Michalec notching his 21st save of the season for the Bears. Kansas should still be good for the regionals with a 43 RPI.