The No. 6 Louisville Cardinals and the No. 23 Maryland Terrapins each entered new leagues and most of us expected them to have success quickly. Maryland jumped from an already deep ACC into the suddenly very strong Big 10 while the perennial American Conference champion Cardinals jumped to the ACC.

On Sunday both squads exerted and asserted their mettle as the clear favorites in their new homes.

Louisville clinched their series on the back of outfielder Corey Ray’s four-hit day. He had a pair of doubles and runs scored with an RBI to go along with Sutton Whiting’s two-hit, two-run scored, three-RBI effort. Zach Lucas added his third long ball on the season as his bat continues to awaken.

Maryland finished off a sweep of the No. 19 Nebraska Cornhuskers in come-from-behind fashion. After starter Kevin Mooney spotted the Huskers a 5-0 lead, the Terps chipped away, scoring in five of the last six innings. Freshman Kevin Smith hit a two-run homer (2) to tie the game in the seventh and then scored the winning run on an errant throw by Nebraska second baseman Jake Placzek while attempting an inning-ending double play.

Maryland has a chance to put a lid on the regular season crown as it hosts the Iowa Hawkeyes next weekend.

Just when you thought it was safe crown the Big 12 Conference to the No. 1 TCU Horned Frogs a contender to the crown arrives. The Oklahoma State Cowboys have thrown down the gauntlet and are ready to make their claim on the Big 12.

Let’s not forget the Cowboys have now won all three Big 12 series this season, and that includes a series win at TCU. Oklahoma State imposed their will on the No. 17 Texas Longhorns this weekend, completing a sweep with an 8-3 win on Sunday.

Starter Michael Freeman continues to absolutely own Sundays for the Pokes as he struck out seven in eight innings while allowing only a pair of earned runs, virtually tanking the Longhorns bats.

The offense didn’t look so bad either, led by Dustin Williams five-RBI day at the dish. Donnie Walton has made an immediate and substantial impact since returning to the lineup. He had a three-hit day and joined battery-mates Gage Green and Conor Costello with two runs scored each.

The Cowboys have the No. 11 RPI and deserve consideration in the College Baseball Central Top 25.

The team from the “Show Me” state has shown us exactly what they’re made of. It’s time for us to brush off the bad memory of a home series sweep at the hands of Milwaukee and recognize what the Missouri Tigers have accomplished in the SEC.

They pulled of a sweep at Georgia, won a series at home over South Carolina and after losing a series at No. 5 Texas A&M just took a series from the No. 3 Florida Gators. 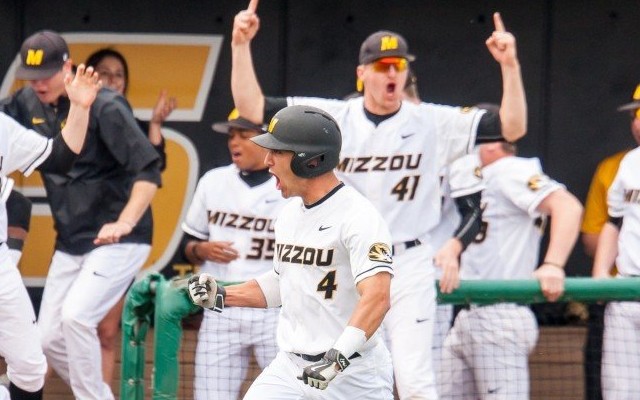 On Sunday, it was one big inning, keyed by a three-run homer off the bat of Ryan Howard (2), as the Tigers took the series with a 5-3 win. Florida third baseman Josh Tobias tried to win it by himself with an RBI triple and a solo homer to pace the Gators offense.

“While Missouri’s RPI is still low at 39 because of the Milwaukee series, if this squad keeps winning they will play their way into an at large bid with an 8-4 conference mark.” – Literal Larry, College Baseball RPI Analyst

Tyler Payton continues to build his resume as a two-way player with a two-hit, two-RBI day as the Iowa Hawkeyes won 4-1 to finish off a road sweep of the Purdue Boilermakers. Payton set the tone for the series by allowing an earned run over eight with seven strike outs while scattering seven hits and a walk.

However, the junior also made his presence felt at the plate, hitting .429 (6-for-14) for the series with two runs scored and four RBI. In the closing game, Calvin Matthews gave the Hawkeyes a quality start, allowing an earned run over six with five strike outs.

Iowa is putting together a solid postseason resume with a 23 RPI and is now set to face Maryland for early control of the Big 10 Conference.

You can’t help but feel a little sorry for how things have gone for the Oregon Ducks this season. As the season opened they were a preseason Top 25 team but have hit the offensive skids and have now dropped seven of their last eight games.

The Michigan State Spartans rolled into Eugene and swept the Ducks by a combined score of 18-9. Oregon hasn’t had a weekend series win in a month and need some traction to build team confidence for a squad that is helplessly spiraling out of relevance for the 2015 postseason.

The No. 2 Vanderbilt Commodores are hitting their stride while still not playing their best baseball. The Dores have won 16-of-18 and just finished off a road sweep of the Georgia Bulldogs with a 4-2 come-from-behind win. Vandy put together a three-run, seventh-inning rally keyed by a two-run double by lead-off man Ro Coleman.

Jordan Sheffield battled through control problem and allowed two earned runs over five before handing the game to Kyle Wright and Philip Pfeifer who shut out the Dawgs over the final three innings for the win.

With losses above them, the Commodores are almost certain to see some upward mobility in the next rankings.

I know, before you object to it being wins in Conference USA, you must concede that to keep winning at a high pace is considerable. The No. 13 Rice Owls shutout the Middle Tennessee State Blue Raiders 10-0 as Jordan Stephens (6.0 IP, 3 H, 0 ER, 8 K) and Matt Ditman (2.0 IP, 0 H, 0 ER, 3 K) combined for a three-hit shutout and eight strikeouts to clinch the series and a 3-1 week. Brandon Rhodes allowed an earned run over six as the No. 21 Florida Atlantic Owls finished off an unbeaten week with a 6-1 win to complete a sweep of the Marshall Thundering Herd. 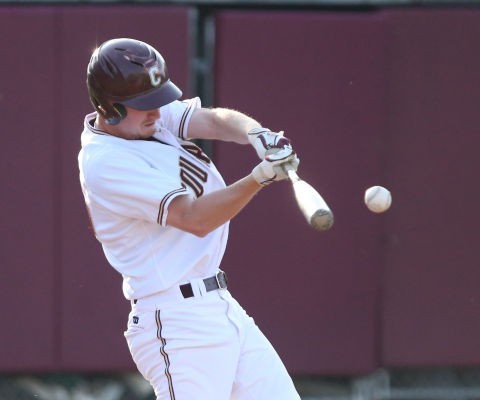 Putting this in the “in case you missed it” file. One of last season’s postseason Cinderella teams was the College of Charleston Cougars who now sit at 21-7 with a 9-0 conference mark. The Cougars have won seven straight games and 11-of-12 and are surging as expecting in conference. However, CofC is a dangerous team to watch for the second half with a 33 RPI and with a solid arm in Taylor Clarke (6-1, 1.69 ERA, 72 K, 8 BB, .192 OBA) throwing on Fridays and a team average of .312.

Just when we were ready, and understandably so, to write off the postseason chances for the Notre Dame Fighting Irish, they decided to rebound. Admittedly, a road series sweep over Pittsburgh isn’t something to write home to mom about this Easter, it is a turnaround for a unit that had lost six straight ACC games after opening with a series win at Clemson. Jake Shepski led the way with a 3-for-4 day at the dish with a run scored and two RBI. With the likes of Florida State and North Carolina State coming to town the next two weekends it is now do or die time for the Irish postseason hopes.

The Tennessee Volunteers hit a reset button and grabbing a road SEC series win over the Ole Miss Rebels has to help boost this talented squad’s confidence as they try to climb back into the Top 25 and postseason consideration. Since the reset they are 5-3 with a series loss at No. 2 Vanderbilt. After dropping game one of the set with Ole Miss as Kyle Serrano was hit hard and knocked out after three innings, having allowed six earned runs, the Vols responded with two straight wins. On Sunday Drake Owenby allowed two runs over eight to clinch the series.

Maybe things are looking up? We’ll see with red-hot Missouri coming to Knoxville.