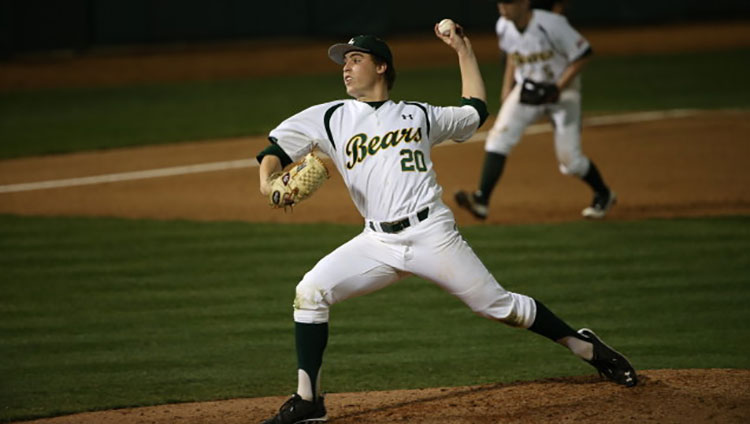 When Steve Rodriguez took over as the head coach of the Baylor Bears, he had a big job in front of him. The Bears had really struggled in Big 12 play over the previous couple of years and they had clearly fallen behind a number of their in-state rivals that they had long beaten both on the field and in recruiting battles.

Given the type of rebuilding job on his hands, expectations for the 2016 season were understandably modest.

It’s important to remember, though, that this is not a program without plenty of talent to go around, and with big years from a few key players, Baylor could be a surprise team in the Big 12.

On Friday night, in a 4-2 win over the 24th-ranked Houston Cougars on the road, two such players, starting pitcher Daniel Castano and outfielder Darryn Sheppard, held up their end of the bargain and made a convincing case that the ceiling for what the Baylor Bears can accomplish this season is far higher than we’ve been giving them credit for.

The lefty Castano was masterful on this night, throwing seven innings, giving up five hits and no runs with two walks and six strikeouts. He threw 100 total pitches on the button, with 65 of those going for strikes. He didn’t spend a ton of time in trouble throughout his start, but when he did, he deftly worked his way out of trouble.

In the first inning, he punched out Justin Montemayor to strand a runner on second base. In the third, two runners reached through no fault of his own (an error on the shortstop Josh Bissonette and a catcher’s interference), and he was able to get out of the jam by inducing a flyout from the hot-hitting freshman Joe Davis.

In the fifth, not only did he work out of a major jam, but he also showed his ability to field his position. He walked Jose Reyes with one out in the frame, and Connor Wong followed up the free pass with a single down the right field line, moving Reyes to third. Michael Pyeatt then attempted to bring home the run with a squeeze bunt, but Castano was quick getting off the mound and was able to make a bare-handed scoop and toss to the catcher Matt Menard to nab Reyes at the plate. With two men still on, he then got Davis to ground into a fielder’s choice to end the threat.

In the sixth, he worked his way out of one last jam, getting pinch-hitter Zac Taylor to ground into a fielder’s choice of his own with two men on.

Rodriguez was quick to compliment has ace’s performance, and more specifically, his willingness and ability to battle.

“Offensively, this team (Houston) is pretty impressive when you watch them take BP and when you see the approach they have. I thought Daniel just did a phenomenal job keeping the ball down and mixing pitches. I’m very proud of the way he competed out there for us. When we got in trouble a little bit early on, he was able to battle out of it and get us some ground balls and allow our offense to continue to grow like we did,” he said.

Darryn Sheppard also played a role in the win, and to this point of the season, he has been the team’s most dynamic offensive force.

The junior outfielder went 1-for-3 with an RBI, but he scalded the ball each time up. In his first at-bat, he lined a sharp single to left-center. In the fourth inning, he lined a ball to center field, but Houston center fielder Corey Julks robbed him by laying out to make the catch. Two innings later, he scalded a ball back up the middle, but Houston pitcher Andrew Lantrip snared the comebacker and threw him out at first. Finally, in his last at-bat, justice was served to a certain degree, as a couple of Houston errors put a runner on third base and allowed him to get an RBI when he flied out to deep right field in the eighth inning.

After Friday night’s game, Sheppard is hitting .412 with three doubles, two home runs, and 16 RBI, all good for the team lead. It’s still early in the season, of course, but we could be witnessing his long-awaited breakout season.

Coming out of high school in 2013, Sheppard was a 24th-round draft pick of the Texas Rangers, but he elected to head to Waco instead. Despite his immense talent, he struggled at times in his first two seasons on campus, hitting .160 and .229, respectively, in 2014 and 2015.

Even with his talent and production matching up in this early stretch of 2016, Rodriguez says that he’s not yet sure Sheppard even realizes how talented he is.

“I’ll tell you what, his composure is very impressive and I just don’t know if he realizes how talented he is. These past couple of games, he has just scalded some balls and he hasn’t really had a lot to show for it. He has really worked hard, and we have gotten on him pretty good just simply because we want him to understand the talent level that he actually possesses, as I think he is one of the best right-handed hitters in the country. I just don’t think he thinks that yet. We’re trying to give him the confidence, and now that he is having some success, hopefully that will help build it,” he said.

Castano and Sheppard are just two players, and we’ve got a lot of baseball yet to be played, but with more performances like the ones we’ve seen already, you have to like the chances that the Bears will far outperform those modest expectations placed upon them this season.