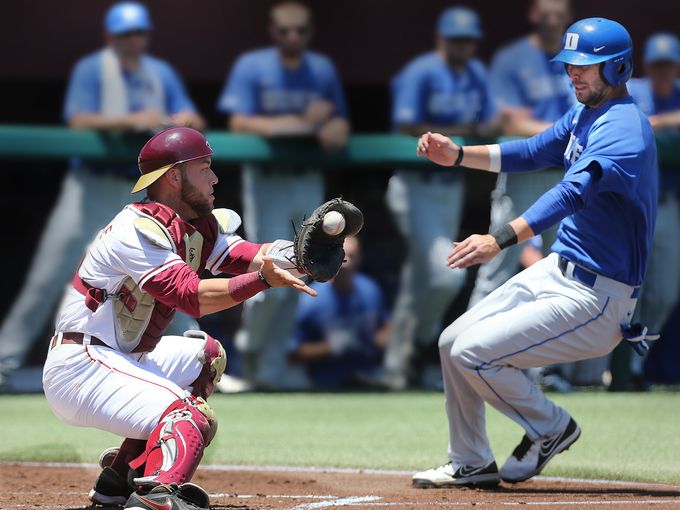 In the field, the catcher is arguably the most critical position on the team. They are the on-the-field leader, directing traffic and works closely with the pitching staff. Having a veteran backstop at the college level is a much underappreciated asset to have.

For both the Miami Hurricanes and Florida State Seminoles, not only do they have two veteran backstops but both have been instrumental in their program’s success this year.

Senior Garrett Kennedy split time with Zack Collins early on in the season but has taken over the majority of the catching duties to allow the sophomore to focus on his hitting. The end result has seen Kennedy play tremendous defense, as well as becoming one of the better hitters on a loaded Hurricanes roster.

During ACC Conference play, Kennedy leads the Hurricanes in batting average with a .389 mark and has hit .358 overall on the year. Not bad for a player who had hit .239 his first three years with Miami.

Not only has he provided an extra presence in the lineup, he has been the steady force behind the plate – throwing out half of attempted base stealers and having yet to commit an error or allow a passed ball.

Strong defense is nothing new for Kennedy, as he has thrown out 32.9% of base stealers since his sophomore season (fielding stats as a freshman were unavailable on school’s site). It has been the hitting that has allowed Kennedy to take the next step as an overall player.

For the Seminoles, they weren’t sure if they were going to get their catcher – a junior at the time – back for a senior year after being drafted  by the Texas Rangers but Danny De La Calle returned to instantly boost Florida State’s defense.

Getting their catcher was key to a pitching staff that was going to have to break in some young arms in key roles after losing two weekend starters from a year ago. De La Calle only committed a single error last year and threw out nearly 40% of attempted base stealers.

This year has been a revelation offensively for the catcher, as after only registering three extra base hits his first year with the Seminoles, De La Calle has easily blown past that mark. The Miami Dade transfer has collected 14 extra base hits to this point, six of which were home runs.

The defense has suffered a bit, as De La Calle has only thrown out 22.5% of base stealers, but working with young pitchers who are newer to controlling the run game could be a factor. He has also committed four errors, and has been charged with three passed balls.

As the season has worn on, he has improved though, as he is throwing out 31% of base stealers in ACC play.

Playing catcher is a tricky position, one where you must be a complete ‘team first’ type of player to truly succeed as sometimes you have to sacrifice some of your own success offensively for the better of the pitching staff and the team in general.

But Kennedy and De La Calle have shown the ability to be great veteran players both offensively and defensively. Collectively the two have hit .313, driven in 52 runs, scored 59 of their own, hit ten home runs and slugged .502 all the while throwing out 31% of base stealers and committing only four errors on over 500 chances.

Given their success this season, it won’t be too far a stretch to say that this will be a matchup to watch and one that may determine the outcome of the series.