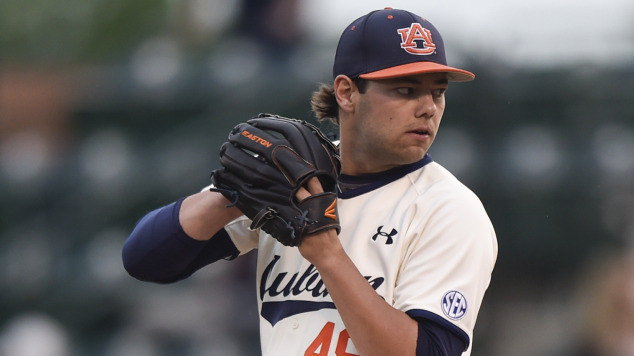 AUBURN, Ala. – Cole Lipscomb hurled the Auburn Tigers to a series-opening, 4-2 win over the Georgia Bulldogs on Thursday night at Plainsman Park in the most RPI relevant match-up on the night. The 6’ 1”, 191-pound sophomore admittedly didn’t have his best stuff but was effective in working with an early lead as he allowed two earned over seven to improve to 6-1 on the year.

Trey Wingenter closed out tossing two scoreless frames for his second save on the year. Auburn jumped to a 3-0 lead after an abnormally-built, first-inning rally made up of a double, three singles (one of the bunt variety), a walk, a wild pitch and a hit batsman with Anfernee Grier, Daniel Robert and Blake Logan each knocking in runs.

However, in my cracked opinion I think this game is insurmountably more meaningful for College Baseball Regionals aspirations than the game of the night between the No. 1 Texas A&M Aggies and the No. 4 LSU Tigers which pits two squads at the top of the College Baseball Central Top 25 against each other. If interested, you can read more about this match-up in Joseph Healy’s College Baseball Central Weekend Preview. Now, what was I saying?

Why do I think this way?

“Borderline RPI rankings will drive much of the bubble discussion until the season ends.” Literal Larry, College Baseball RPI Analyst

Georgia left town with a 95th ranked RPI to face Auburn’s No. 24 RPI. Texas A&M and LSU entered their matchup at No. 5 and 6 respectively and barring an abysmal collapse of epic proportions both will be participating in the postseason.

However, the Tigers are just close enough, with a No. 24 RPI, to be solidly in today, yet with a series loss at home to the Bulldogs could be sitting on the wrong side of the bubble come Monday. Georgia is not in the bubble conversation as of today, but can get closer to such with a series win. A sweep would have been icing on the cake but we already know that can’t happen so the Dawgs will look to take a series win on Saturday and Sunday.

Or, as better said in the eloquent words of the immortal Ricky Bobby, “If you ain’t first you’re last!” and that’s trademarked!

By the way, the Tigers dropped the Aggies 4-3 to take game one of their “winner-gets-number-one” series this weekend.