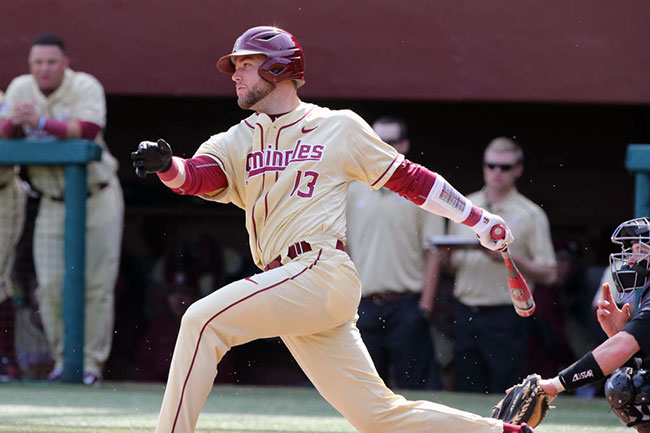 The Florida State Seminoles went a perfect 5-0 this past week after sweeping both their midweek series against South Florida and their weekend matchup against Boston College.

Showing a great blend of pitching and hitting, the Seminoles rung up 24 runs against the USF and behind Mike Compton threw a two-hit shutout against Boston College.

Helping out in the offensive outburst was the nine-hole hitter for FSU, senior Danny De La Calle. After turning down a chance to play professional ball before coming to Tallahassee, De La Calle has blossomed into one of the Seminoles best hitters after just hitting .224 last year.

After a week that saw the catcher hit 8-for-17 (.471), De La Calle is now second on the team in average – tops for any player that has started at least ten games.

Half of his hits were for extra bases, slugging three doubles and a home run in the five games. He also scored seven runs by putting himself in position to be driven in by the top of the order.

Some teams only hope that they will get a contribution from the nine-hole hitter here and there; the Seminoles have gotten that and more. With a .850 OPS, De La Calle has turned into anything but your run of the mill nine-hole hitter, which begs the question – would the Seminoles move him out of the bottom of the order?

Freshman Taylor Walls and Darren Walls have played well as they have moved to the top of the order and despite a low average; John Sansone has been serviceable in the cleanup spot – currently only behind D.J. Stewart in home runs.

Keeping De La Calle at the bottom of the lineup makes the Seminoles that much better, even if he is hitting like a player who should be in the heart of the order.

De La Calle will look to continue his hot start to the season – along with the rest of the Seminoles – with games against the Central Florida (midweek) and Wake Forest (weekend).