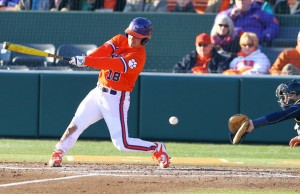 Expectations are always high for the Clemson Tigers and with another year in the preseason top 25 this was no different. The 2015 season, however, got off on a sour note as the Tigers lost two of three against the West Virginia Mountaineers.

The offense was unable to do the rotation any favors, as Clemson’s offense batted .253 over the weekend with a measly .295 slugging %. The starters combined for a 1.13 ERA over 16 innings over the weekend.

Things got off to a rough start from the get-go, as Clemson got shutout in the season opener and went 0-for-8 with runners in scoring position.

Steven Duggar and Tyler Krieger, the team’s three-hole and clean up hitters, combined for nearly 40% of the team’s hits over the weekend as the rest of the lineup struggled to find any consistency.

Despite winning game two of the series 4-2, only one player registered multiple hits (Krieger) and registered only eight overall.

Game three saw the Tigers combine to scatter ten hits throughout the game but still only manage to score one run. All together Clemson combined to leave 24 batters on base, and ground into four double plays and failed to hit for a single extra base hit.

After a Wednesday mid-week game against Charleston Southern, Clemson will take on the Maine Bears in their second weekend series. The Tigers will play seven of the next nine games at home, with their series against the South Carolina Gamecocks being split between a home, away, and neutral site games.

Pitt Panthers Looking For Consistency At The Plate