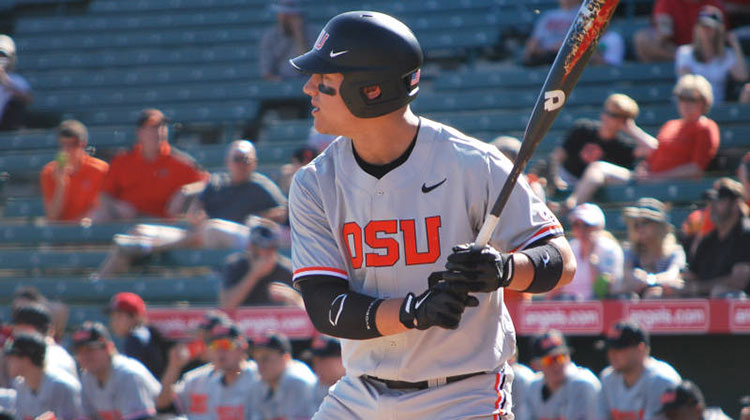 The stars came out to shine on opening weekend in the Pac-12 Conference after a shaky Opening Day. The defending National Champion UCLA Bruins were handed a surprise 1-0 loss to open the 2014 season in Jackie Robinson Stadium and needed 11 innings to gain the weekend series over the upstart Portland Pilots out of the West Coast Conference. UCLA junior reliever David Berg, the Pac-12 Pitcher of the Year earned his first win on Sunday after throwing four scoreless innings. Junior LHP Grant Watson notched an easy 12-1 win on Saturday behind the big Bruin bats of 3B Chris Keck (4-5, 3 runs, 1 RBI) and shortstop Trent Chatterton (2-5, 1 run, 3 RBI).

The Baseball America No. 2 Oregon State Beavers also struggled on Opening Day against the defending West Coast Conference champion Gonzaga Bulldogs on Friday after trailing 3-1 heading into the seventh inning. The Beavers’ starting pitcher Andrew Moore, fresh off his Pac-12 Freshman of the Year award struggled in six innings giving up five hits and three runs, one earned. The Beavers  responded with a run in the seventh and took the lead for good on Jeff Hendrix’s 2-run single to center with two outs. The next two games for the Beavers were typical Oregon State, scoring 15 runs on Saturday and 14 on Sunday.

The USA Today Coaches Poll No. 7 Oregon Ducks traveled to Honolulu for their annual season opener against the Rainbow Warriors of Hawaii and needed late-game heroics on Friday and Sunday to propel past Hawaii. The Ducks benefited from a ninth-inning, 2-out strikeout wild pitch that allowed Nick Catalano to score from second to take a 3-2 lead. NCBWA Stopper of the Year Watch List pitcher Garrett Cleavinger tallied his first win and Jake Reed notched the save. Saturday’s slugfest was fueled by sophomore first baseman Mitchell Tolman’s 2-of-3 appearance with two runs and two RBI and senior right fielder Tyler Baumgartner’s 3-of-5 hitting with two runs scored.

Freshman pinch-hitter A.J. Balta provided the go-ahead two-run single in the seventh and the Ducks never looked back winning 10-5. Sunday’s game nearly slipped away from the Ducks when Cleavinger had an off-night giving up two hits and three runs in two-thirds of the eighth inning. Junior Jake Reed relieved Cleavinger and pitched the final 2.1 innings giving up only one hit and one walk to earn his first win of the season.

The USA Today Coaches Poll No. 19 Arizona State Sun Devils notched an opening series victory taking two of three from the Baylor Bears. On Opening Day, the Sun Devils exploded for four runs in the bottom of the seventh to take a 7-2 lead, then imploded giving up seven straight runs to the Bears.  Pitchers Ryan Burr and Darren Gillies were impressive in the first seven frames giving up only three hits while striking out seven. Senior RHP Josh McAllister was lit up by the Bears, giving up four hits and three runs to the five batters he faced before being replaced by freshman Nick Diamond. Diamond took the loss in his first appearance hitting two batters and giving up three runs in the ninth including a two-run home run.

Arizona State bounced back nicely on Saturday when sophomore reliever Eric Melbostad came in to relieve starter Ryan Kellogg who gave up two home runs. Melbostad gave up a leadoff single and went on to retire the next 12 batters that he faced securing the 7-4 win. An early defensive battle on Sunday saw Sun Devil starting pitcher Brett Lilek tally a career-high seven strikeouts including five of the first seven batters he faced. The teams were knotted at one run apiece after 5.5 innings before the Sun Devil bats came alive. The Devils scored nine in the sixth and added two more in the seventh to secure the 12-1 victory. Starting catcher Brian Serven went 2-for-2 with a walk, two RBI and three runs scored and second baseman Tucker Esmay went 3-of-4 with two RBI and a run scored.

The USC Trojans swept the Northwestern Wildcats in its opening series, but it was no easy task. The Trojans needed 11 innings on Friday and 15 on Saturday before winning in regulation on Sunday. Senior RHP James Guillen picked up both extra-inning wins facing only five batters in both games.

The Cal Golden Bears hosted the Baseball America No. 18 Texas Longhorns and outscored scored the ‘Horns 9-1 in the first two games. Texas responded with a 5-0 shutout on Sunday to avoid the sweep.

The Arizona Wildcats trounced Kent State in their season opener 13-1 but the Golden Flashes returned the favor on Saturday beating the Wildcats 14-5. The ‘Cats took the rubber match on Sunday besting Kent State 7-1.