As you’re sipping your joe this morning let’s take a look at what kind of RPI impacts we saw in the action this weekend. One series lingered longer than the rest, simply because the weather wouldn’t let up, as the top team in the College Baseball Central Top 25 took it on the chin. The No. 1 Texas A&M Aggies lost a series at home to the Arkansas Razorbacks and in doing so managed to find their way into the Top Guns this week.

A couple of road sweeps highlighted the other two Top Gun match-ups with No. 22 Nevada taking down San Diego State and the intriguing San Fransisco Dons whipping up on San Diego. Our Maverick for the week comes from the Atlantic 10 conference while the Goose hails from the Western Athletic Conference.

In spite of a 2-2 week, Rhody is the Maverick of the week jumping 47 spots to the 120th ranked RPI in the land. The Rams took 2-of-3 on the road against the Richmond Spiders who are No. 75 in RPI behind two great pitching performances by a pair of southpaws. Junior Steve Moyers took the bump on Friday and allowed two earned runs over eight innings with eight strikeouts as the Rams took the opener 7-2 helped by Martin Taveras’ two-run homer and three RBI day.

Freshman Tyler Wilson improved to 5-0, tossing a complete game shutout as Rhode Island clinched the series win on Saturday with a 3-0 victory. They would fall 6-1 in the getaway game. Wilson has put together a remarkable rookie campaign with a 1.14 ERA, .126 OBA, and a 0.80 WHIP. The two road wins over a high RPI squad coupled with a midweek road loss to the Boston College Eages (50 RPI) who swept the Georgia Tech Yellow Jackets (17 RPI) this weekend aided in the RPI boost for Rhody.

“Often an RPI ranking is as much about how you did this weekend is as it is about how the teams you played did this weekend. Rhody played well and so did Boston College which contributed to a great jump in RPI for the week.” – Literal Larry, College Baseball RPI Analyst

The Wolverines took one on the noggin this weekend suffering a sweep at the hands of the Northern Colorado Bears with an RPI is ranked near the bottom at 294. In game one, Utah Valley lead-off hitter Kade Andrus hit a three-run homer to knot the game at 6-6 but an RBI-single in the seventh by Marco Castillo proved to be the game-winner for the Bears. Northern Colorado jumped to a 10-1 lead after four in game two en route to a 12-7 win to clinch and the finished off the sweep behind a solid day on the bump from Bears’ starter Nick Tanner (6.0 IP, 1 H, 1 R, 5 BB, 4 K). The Wolverines fell 50 spots in the RPI rankings in the series sweep.

“When you get swept by a team anywhere near a 300 ranked RPI you are in for a free-fall to your own ranking.” – Literal Larry, College Baseball RPI Analyst I’ve sent my editor several texts this season about my own personal intrigue with the San Fransisco Dons. This squad opened the 2015 campaign at 0-10, losing four at Texas Tech, one at San Jose State, three at Tulane and then one each to Utah Valley and New Mexico in Albuquerque, New Mexico. However, since then the Dons have gone 22-9 with upsets of Cal, Oregon and Nevada and now, after this weekend, a series sweep of the former West Coast leader in San Diego to take a two-game lead in the conference.

“Road series are crucial, especially if you are trying to make up ground in RPI. For San Fransisco to start 0-10 and sit now at an outside-looking-in RPI of 111 is astounding and a testament to how well this team has played, essentially winning 2-of-3 since the rocky start. I’m certain that if this team can snag the WCC crown it will be a dangerous College Baseball Regionals opponent.” – Realist Ray, College Baseball RPI Analyst

Entering the weekend San Fransisco sat at 144 in RPI while San Diego had hedged itself as the clear conference favorite with a 76th ranked RPI. The Dons turned everything around this weekend in San Diego at Fowler Park in a sweep by scores of 9-6, 6-2, and 6-4. San Fransisco benefited from a pair of fabulous starts on Friday and Saturday with Anthony Shew allowing an earned run over eight in Friday’s win and Christian Cecilio allowing a couple of earned runs in eight innings of work in Saturday’s clinching win.

The series win improved the Dons RPI ranking by 33 spots (144-to-111) and sunk the Toreros down 32 spots (76-to-108). The big story was told at the plate as the Dons pounded out 37 hits and plated 21 runs on the road against a Toreros staff that has a 3.61 ERA on the season. San Fransisco was led offensively by Derek Atkinson who hit two homers and a triple in the series while scoring four times and driving in four runs.

We’ve been waiting for it to happen and it finally occurred with right at a month to go in the regular season. Things didn’t work out for the Aggies this weekend as they had for the first two-thirds of the season and it cost them a home series loss, their first series loss of the year. After the Aggies took game one 13-6 and then led game two 8-3 before it was suspended (nice weather, eh?) to be completed as part of a Sunday twin bill, it looked as though Texas A&M was going to continue asserting it’s top-ranked mettle.

Suddenly, the feisty Hogs put together a pair of big innings to take the podium as the first squad to wrestle a series win from the Aggies all year. Arkansas put together a five-run, eighth-inning rally to win game two 9-8 and then plated six runs in the first inning of game three in an 8-2 win to take the rubber match and the series. Hogs hitters mashed the ball for 31 hits and scored 23 runs against a potent Aggies’ staff which included scoring in bunches against their pen which has been indomitable all season.

“Andrew Benintendi has been a beast for the Hogs. Even though he went homer-less for the series he had six hits and scored six times while also drawing three walks. His .370/.733/.475 slash line is monstrous, especially when you consider that he leads the Hogs in each of those categories as well as runs scored (43), and RBI (42). Oh, did I mention he doesn’t just lead the team, but the nation, with 14 long balls. He is incredibly talented and is the spark plug that makes Arkansas go.” – Minimalist Mark, College Baseball RPI Analyst

With the series win the Hogs jumped a full 34 spots in RPI ranking, from 86 to 52 and have thrust themselves right into the College Baseball Regionals conversation. Meanwhile the Aggies only dropped a spot, from fourth to fifth, in RPI and will look to recover quickly from this series loss with a trip to No. 5 LSU looming next weekend. 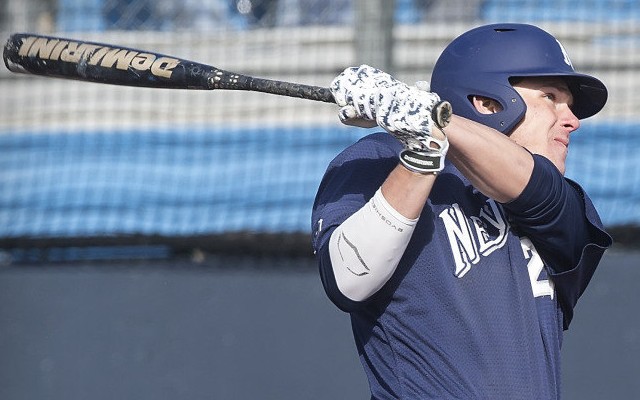 Honestly, this series wasn’t even close. Nevada set the tone for the series by pounding Aztecs’ ace Bubba Derby to the tune of seven earned runs over 5.1 innings in spite of his nine strike outs in a 14-3 route to open the series. Kewby Meyer went 4-for-5 to lead the 18-hit parade for the Wolf Pack while reliever Evan McMahan dialed in five scoreless innings on the bump to improve to 4-0. In game two the Pack jumped to a 7-2 lead and held off a late rally for the 8-5, series-clinching win as Meyer drove in three more runs on a 2-for-5 day at the plate and Jordan Pearce added three RBI in the effort. Pack starter Jason Deitrich had a quality start to improve to 5-2 and closer Adam Witt snagged his 13th save of the season in tossing 2.1 scoreless frames.

“Nevada has shown it deserves to be on top of the conference. Taking a road series in this fashion is proof-positive that they are right where they belong on top of the Mountain West standings. The Wolf Pack wanted and needed to make a statement and that is exactly what they did.” – Realist Ray, College Baseball RPI Analyst

Nevada decided game three early, jumping to a 4-0 first inning lead on a three-run homer by Meyer and then extending the lead to 15-0 by the fifth inning on an Austin Beyler grand slam and a Ryan Howell two-run shot as the Pack blew out the Aztecs 16-4. The Pack mashed 45 hits against the stingy San Diego State pitching staff en route to scoring 38 runs and help the dynamic Aztecs offense to only 12 runs in a total series domination.

The series loss left the Aztecs reeling as they dropped 19 spots from 55 to 74 in the RPI rankings and are solidly on the wrong side of the bubble in what was a wild change in terms of College Baseball RPI. Meanwhile the Wolf Pack solidified their position as they jumped 22 places, from 53 to 39 and are a solid at-large candidate if things don’t work out for the conference crown.