The No. 9 UCLA Bruins, behind James Kaprielian’s (Jr., RHP) performance, and the No. 10 USC Trojans were the only Top 25 teams out west that handled their business on a zany Friday night that saw a mix of upsets and domination. San Diego continues to make a mark on the early going in the 2015 season as both the San Diego State Aztecs and the San Diego Toreros opened their weekend series with wins.

The No. 14 Oregon Ducks couldn’t get off the snide with a loss to open the weekend, but they weren’t alone as the No. 15 Arizona State Sun Devils dropped a pitcher’s duel to open their conference slate. Let’s swing around the conferences out west and take a look at the action.

LOS ANGELES, Calif. – Junior right-hander James Kaprelian (4-1) threw seven scoreless innings with 10 strikeouts to propel the No. 9 UCLA Bruins to a 2-0 win over the Washington Huskies to open Pac 12 play at Jackie Robinson Stadium on Friday night. Huskies’ freshman Noah Bremer (RHP) took the loss in his first Friday night start allowing only an earned run over 5.2 innings of work which came on Kevin Kramer’s (Jr., SS) fourth long ball of the year, a solo shot in the first inning, which proved to be the difference in the game.

LOS ANGELES, Calif. – The No. 10 USC Trojans continued their torrid start with a 10-3 win over the Washington State Cougars in which they plated 10 runs on 14 hits led by Bobby Stahel’s (Jr., LF) 4-for-5 night with four runs scored. Timmy Robinson (Jr., CF) added a pair of hits including a two-run double in a four-run sixth-inning rally that put the game out of reach. Brent Wheatley (Jr., RHP) remained unbeaten at 2-0 as he worked around a couple of jams allowing only two earned runs while striking out eight over seven innings of work.

BERKELEY, Calif. – The dynamic duo of Cole Irvin (So., LHP) and Conor Harber (Jr., RHP) hit its first snag as the pair were struck for seven earned runs over 7.2 innings pitched as the California Bears upset the No. 14 Oregon Ducks 9-3 at Evans Diamond Friday night. Outdueling the combo was Cal freshman righty Jeff Bain (3-0) after shutting down the Ducks over six innings before their offense plated three in the seventh. The Bears’ got a pair of homers from the right side of the infield in Chris Paul (Sr., 1B) and Max Dutto (Jr., 2B) as the offense efficiently churned out nine runs on nine hits, scoring in all but two innings in the win.

PHOENIX, Ariz. – The Oregon State Beavers upset the Sun Devils 1-0 after a pitcher’s duel between Sun Devil starter Seth Martinez (So., RHP) and Beaver’s ace Andrew Moore (Jr., RHP) sent the game into the ninth inning scoreless. Moore didn’t allow an extra-base-hit until the eighth inning, tossing 7.1 scoreless with three strikeouts while Martinez was up for the challenge with eight scoreless of his own before the Beavers broke through against the pen in the ninth. After two Beavers reached against Darin Gillies (Sr., RHP), who has been amazing out of the pen, Arizona State turned to lights-out fire-baller Ryan Burr (Jr., RHP) to stop the rally who struck out Logan Ice (So., C) before surrendering the two-out, RBI single to Caleb Hamilton (So., 3B) that proved to be the game-winner.

WICHITA, Kan. – Junior right-handed phenom Dillon Tate allowed an earned run over eight inning while striking out six and handed the No. 19 UC Santa Barbara Gauchos pen a 2-1 lead that would evaporate as the Wichita State Shockers pull the upset with a walk-off single by Jordan Farris (Jr., 2B) for the upset win. Tate allowed only four hits and the Gauchos built a 2-1 lead on a pair of fifth inning RBI hits by Woody Woodward (Sr., 2B) and Luke Swenson (Sr., RF). Yet, in the ninth, freshman righty Joe Record allowed a walk and a pair of single, including the game-tying hit by Daniel Kihle (Jr., LF) before being chased for Connor Baits (Jr., RHP) who would give up the game-winner. 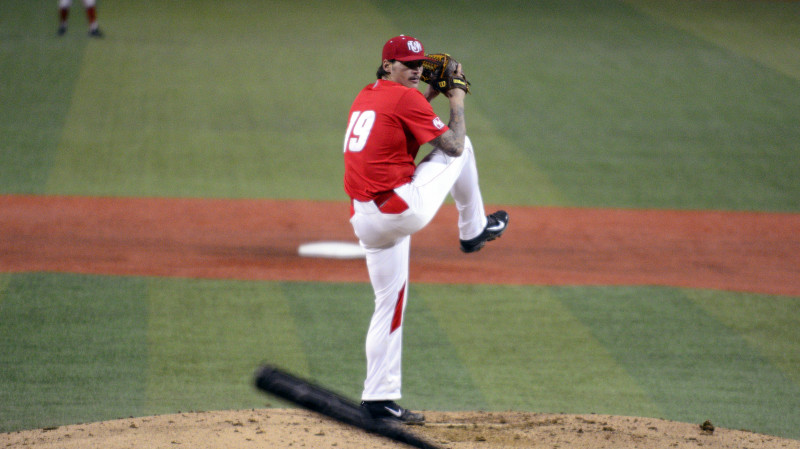 RENO, Nev. - Junior right-hander Toller Boardman improved to 4-0 behind a brilliant performance in the New Mexico Lobos 3-1 win upset win over the No. 23 Nevada Wolf Pack at Peccole Park on Friday. Boardman dropped his ERA to 2.16 while striking out two while allowing an earned run on four hits and a walk over 8.1 innings leaving the game in the ninth after a strikeout with a runner on first. Freshman catcher Cory Voss provided the big hit for the Lobos with a two-run double with no outs in the third inning while Jake Cole (Sr., RHP) recorded his first save of the season.

BLOOMINGTON, Ind. – Postponed to Saturday due to inclement weather.

SAN DIEGO, Calif. - Senior ace hurler David Hill (3-2, 2.16) hurled  a gem for the San Diego Toreros, striking out 14 hitters in the Toreros 3-0 win over the Portland Pilots on Friday. The right-hander allowed four hits and a walk and struck out six over the last three innings of the game after retiring the first seven hitters he face. After surrendering a lead-off triple in the fourth, Hill fanned the next two batters and induced a groundout to end the threat. Quietly the Toreros have won six-of-seven games which includes two wins each over the No. 12 Texas Longhorns and the formerly top 25 Mississippi State Bulldogs.

SAN LUIS OBISPO, Calif. – Brennan Leitao (Sr., RHP) was masterful as he allowed three hits over eight while striking out seven as the Sacramento State Hornets downed the Cal Poly Mustangs 2-0 at Baggett Stadium on Friday night. Leitao grabbed his first win of the season, and his 25th overall, to add to his all-time wins lead for the Hornets. Chris Lewis’ (Jr., LF) two run single to the gap in right was the scoring difference in the game.