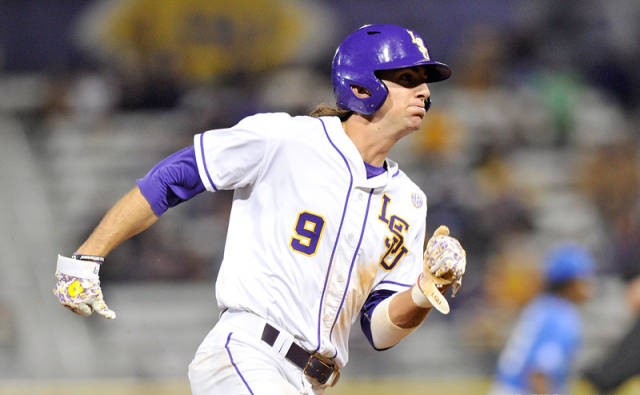 Friday night in SEC Baseball has become synonymous with great pitching, low scores and staff ace domination. However, with the third Friday night of 2015 in the books, the conference is looking a lot less like a lockdown and slightly more like an asylum. Four of the top five teams in the nation took the field and one of them, the No. 1 LSU Tigers, fell.

Another Friday night of wild outcomes was sprinkled with a few of the remarkably dominant pitching performances of which those of us who follow this sport have become accustomed. The wildness is illustrated by the fact that for the second straight Friday, the number one team in the College Baseball Central Top 25 was beaten in an upset.

No. 1 LSU Falls To Kentucky In Extras

LSU (22-4, 4-3) finds itself in a familiar position, down 1-0 in a series heading into the weekend and needing a dominating response after falling to the Kentucky Wildcats (17-9, 3-4) 5-4 in 12 innings Friday night. Ka’ai Tom’s two-run double chopped past Tigers first baseman Chris Chinea and bounced down the down the line in right to end the Wildcats two-out rally.

LSU would plate a run in the home half of the frame with the help of a pair of errors but left the game-tying run stranded only 90 feet away. Tom has been the spark plug of Kentucky’s offense with a .392/.559/.467 slash line and 27 RBI on the year.

The game got to extras after both starters battled into the seventh inning to a 3-3 tie. LSU’s Jared Poche’ was chased with two outs and runners on the corners in the seventh after giving up three runs in the inning on a double and four singles. The sophomore had cruised up to that point having allowed only two hits over the first six innings which included retiring the first 12 Wildcats he faced.

On this night, Kentucky starter Zack Brown would be rewarded for battling as he surrendered nine hits and three walk but managed to hold the Tigers to three runs, two earned, over the same 6.2 inning frame. Brown was chased with two outs in the seventh after a throwing error on a ground ball by third baseman Thomas Bernall allowed the speedy Mark Laird to score from first to tie the game at 3.

The Tigers rest their series hopes in the hands of stalwart freshman Alex Lange who has been amazing so far this season with an unbeaten 5-0 mark, a 1.42 ERA and a 45 strikeouts in 38 innings of work. He’ll battle Kentucky junior Alex Deggs (3-2, 3.44) for mound superiority on Saturday with the series hanging in the balance for the nation’s top team. The Auburn Tigers (16-10, 2-5), behind brilliant outings from their ace Cole Lipscomb and reliever Trey Wingenter continue the Mississippi State Bulldogs’ (18-10, 2-5) struggles with a 5-0 shutout on Friday night. Lipscomb has been dominant four the Tigers with a 1.71 ERA and .200 OBA and it showed against the Bulldogs with seven scoreless frames before Wingenter closed the game out with two more.

The sophomore righty scattered four hits and hits apiece while striking out seven Bulldogs and sat down seven straight in the middle innings to stay undefeated at 4-0 on the season.

In the night cap, Logan Shore returned to some semblance of form as the tossed zeros up on the board in a complete game win as he improved to 4-2 with the eight strikeout performance. The sophomore righty masterfully scattered 10 hits, a walk and a hit batsmen and retired eight straight in the late innings as the Gators pulled away.

It was good to see Shore work to end the homer streak, as opponents hit first-inning homers off him in each of his two prior starts.

Carson Fulmer was exactly who the No. 4 Vanderbilt Commodores (21-5, 6-1) needed him to be as he tossed eight scoreless and struck out 12 in a 9-0 thumping of the Tennessee Volunteers (10-12, 1-6) whose season reset hit the skids on Friday night. Fulmer spread out five hits and three walks over eight innings before handing things over to Ryan Johnson who spun a hitless ninth for the win.

Second baseman Tyler Campbell was the bottom of the lineup machine for the Dores with a 2-for-3 night that included a couple of runs scored and three RBI. No. 5 Texas A&M Aggies (26-1, 6-1) reliever Andrew Vinson threw three scoreless to stop the Missouri Tigers’ (19-8, 5-2) comeback in its tracks as the Aggies pull out a 7-4 win on Friday in a battle of one-loss SEC squads. First baseman Hunter Melton and catcher Michael Barash went back-to-back with RBI singles in the sixth to take a 5-3 lead after the Tigers had stormed back with a three-run rally in the top half of the inning to tie the game.

Melton scored twice and drove in two to pace the Aggies in an effort that chased Tigers’ ace and SEC innings leader Reggie McClain after only 5.1 innings.

Grayson Long struck out seven over five innings of work for Texas A&M.

Arkansas’ Trey Killian struggled for the second straight start since returning to the rotation with five earned runs allowed in five innings pitched.

The No. 11 South Carolina Gamecocks will finish their game with the Georgia Bulldogs at 4 PM on Saturday after play was suspended with the game knotted at 5 headed to the ninth inning.