As you’re waking up and grabbing that second or third cup of caffeinated brew let me take a moment or two to talk about the rascally reality of RPI rankings. They go up, they go down, they make no sense…yet in some ways they make a lot of sense.

As usual, we’ve got a pair of non-power five conference teams topping the charts with they upward and downward movement of their RPI rankings. I’ve pulled a two match-ups this week that illustrate how we may not get quite the RPI movement we expect. Part of the nasty truth is that we’ve just gotta change our expectations.

“RPI is the king on his throne dictating who is who to the world we know as college baseball.” – Literal Larry, College Baseball RPI Analyst

Holding the top spot in the America East Conference, the Stony Brook Seawolves went 4-0 this week. Their monstrous campaign started with a midweek mashing of the Manhattan Jaspers 10-3 before they swept their weekend series with the UMBC Retrievers. The Seawolves sandwiched a one-run win (6-5) in between shut outs in the opening (8-0) and closing (6-0) games of the series as Tyler Honahan and Ryley MacEachern dominated on the bump, allowing three hits over 6.2 innings each in the twin shutouts. Left fielder Jack Parenty swung a feisty bat for the Seawolves as he drove in six RBI on the week while hitting .500 (7-for-14) at the plate.

All the attention in the top-heavy Missouri Valley Conference has been focused on it’s trio of RPI beasts in Dallas Baptist (1), Missouri State (6) and Bradley (13). Yet the lowly Indiana State Sycamores (yeah, that squad that dropped No. 1 Vanderbilt earlier this season) suffered a 1-4 week that began with a pair of midweek losses. ISU dropped a tough 10-6 loss to the Purdue Boilermakers before just missing in a one-run, 5-4 loss to the Eastern Illinois Panthers. Then came the weekend, where they hosted the hapless Southern Illinois Salukis who had won only five games on the year. The Sycamores were spellbound, or maybe unfocused, and dropped the first two games of the series 5-3 and 7-4 before pulling out a 6-2 win on Sunday. Indiana State did have the silver lining of a fabulous week put together by right fielder Jacob Hayes who hit .526 (10-for-19) and scored six times while knocking in six RBI. 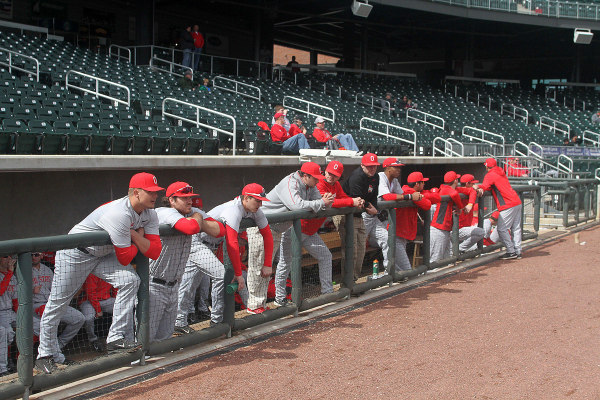 After an impressive early season run the Buckeyes found themselves as a Regional team in our Midseason College Baseball Regionals Projections with a home series against struggling UNLV on the horizon.  Ohio State shot out of the gate and took the opening game 6-5 on a Troy Kuhn walk-off RBI single after erasing a 5-2 deficit on Friday.

Fortunes would change all too quickly in the Buckeye state as they dropped a hard-fought 3-2 decision in game two. Buckeyes’ starter Travis Lakins allowed two earned runs over seven in a duel with Rebels’ starter DJ Myers who allowed two earned over 6.2 innings. The spunky Rebels knocked in the game-winning run with an eighth-inning sac fly to even the series.

Ohio State’s fortunes declined further as they were blasted right out of their own park in the rubber match on Sunday. UNLV strung together a five-run, fifth-inning rally to jump to a 7-2 lead and held off a late comeback attempt to capture the road series win.

“Wins on the road are HUGE for RPI rankings boosts. Especially if you get those wins against teams that are already elevated in the RPI rankings.” – Literal Larry, College Baseball RPI Analyst

UNLV snagged a 26 point boost in RPI from 162 to 136 while sinking Ohio State by 24 points and out of a solid at-large bid for the NCAA Regionals in a costly 50 point combined swing. The Rebels had dropped seven in a row coming into the week but broke their streak by winning a two-day battle in a 7-6 win over top-ranked Arizona State.

The Kansas Jayhawks are locked in a fingernail cling to hopes of making a run at the postseason. However, they jumped out to a 13-20 start and a 1-5 opening to Big 12 play which more than doused expectations of success. As if their hopes couldn’t be any more dashed, the No. 17 Oklahoma State Cowboys rolled into town and rocked what had been an excellent pitching match-up between Pokes’ starter Jon Perrin and Hawks starter Ben Krauth with a four-run seventh-inning rally and then tacked on three more in the ninth for a 7-2 demoralization of Kansas.

So what did the Jayhawks get out of the home series win?

Kansas jumped 31 points of RPI, from 136 to 105, and back into an outside-looking-in spot in at-large consideration while the Pokes dropped a meager five points and remain solid with a No. 12 ranked RPI. The Cowboys had been rolling, having knocked off No. 3 TCU at Fort Worth before dropping their first Big 12 series of the year this weekend. Notre Dame Gets Home Sweep Of No. 11 Florida State

Running three games behind the No. 5 Louisville Cardinals in the ACC Atlantic Division the No. 11 Florida State Seminoles needed a conference series win to keep pace. The Noles took a trip to Frank Eck Stadium to face the suddenly smoldering Notre Dame Fighting Irish in a key series with Regional implications. There couldn’t be a better illustration of just how fickle the RPI rankings can be.

Notre Dame would put on a pitching clinic, starting with Ryan Smoyer on Friday night who allowed two runs over seven before handing a 5-2 lead to Sean Guenther who no hit FSU over the final two innings for his second save. Cavan Biggio hit a two-run homer to tie the game at two and would score in the seventh as Ryan Lidge put the game away with a two-run single.

Brandon Bielak took the bump in game two and was masterful as he allowed an earned run over 7.1 innings on just four hits and two walks before Guenther tossed another inning and two-thirds of no-hit ball for his third save in a 4-1 win. Lidge again provided late insurance with a two-run double in the seventh inning as the Irish clinched the series.

On Sunday, Biggio slapped an RBI double down the line in left and Zak Kutsulis hit a solo shot in back-to-back innings to help secure a 2-1 win and the sweep. Notre Dame pumped out four hurlers who held the Noles to a run on six hits with Brad Bass (1.1 IP, 0 H, 0 R, 0 BB, 0 K) getting the start with Connor Hale (3.2 IP, 3 H, 1 R, 1 BB, 1 K) grabbing the win, Evy Ruibal tossing 3.1 scoreless relief innings and Scott Tully notching his first save by retiring the only two hitters he faced.

One would expect Notre Dame to get a major lift in RPI with a home sweep of the Seminoles who entered the series with the 5th ranked RPI. Yes, the Irish got a whopping 12 point bump in RPI, from 33 to 21 while the Noles dropped only three points, from five to eight.

Notre Dame can find solace in the fact that they have the longest winning streak in the ACC at eight games, with back-to-back sweeps in conference to boot, and with a 21 RPI have placed themselves solidly in the at-large conversation.

“Home wins, even sweeps can be minimized because of the RPI formula. Notre Dame’s result was minimized by not only that, but also, in true bell-curve fashion, there will be less upward mobility the closer to the top you get.” - Literal Larry, College Baseball RPI Analyst