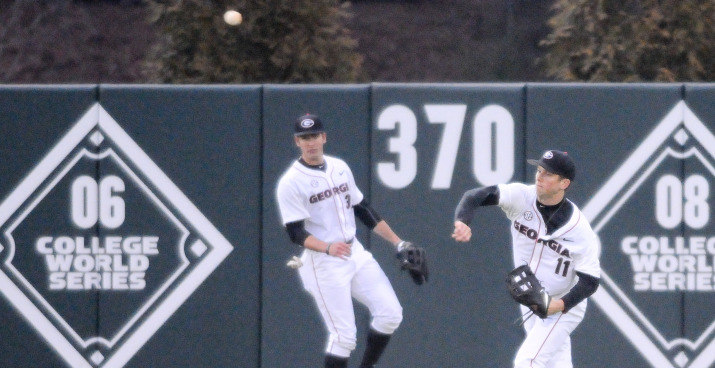 Opinions in college baseball can change quickly! Who remembers how bad the Georgia Bulldogs looked last weekend? The Missouri Tigers had just waltzed right into Athens and strutted out with a series sweep. What made it so bad was that Missouri was just swept at home the prior week by the Milwaukee Panthers out of the Horizon League.

Yet the Bulldogs and Tigers each flipped the script this weekend by pulling off impressive series wins. Georgia whipped the Tennessee Volunteers in a road sweep after pulling out a 2-1 win on Friday night, the Bulldogs took games two and three by scores of 12-7 and 10-4.

Georgia swept the Vols behind another offensive display led by Daniel Nichols (Jr., DH) 2-for-4 effort with two runs scored and three runs driven in. Stephen Wren (So., CF) and Jared Walsh (Sr., 1B) each homered as the Bulldogs turned 10 hits and six walks into 10 runs while Sean McLaughlin (Jr., RHP) improved to 2-1 on the year allowing three earned runs over 7.2 innings of work.

Mentioning Tennessee, does anyone recall that this team was ranked in most Top 25 polls in the preseason? Currently, the Vols are 9-11 and have opened SEC play at 1-4 and will need to right the ship quickly as their next two SEC series are at No. 4 Vanderbilt and at Ole Miss, where the No. 1 Florida Gators just dropped a series this weekend.

Missouri dropped game three of its series to the No. 8 South Carolina Gamecocks 7-5 on Sunday but it was too late as the Tigers had already clinched the series win. Freshman righty Brandon Murray came on in relief and allowed a run over 5.1 innings, giving South Carolina the opportunity to get the offense going. The Gamecocks put up 14 hits and scored seven led by Kyle MartinŌĆÖs four-hit day as Gene Cone (So., CF) and Max Schrock (Jr., LF) each added a pair of RBI on their two-hit days.

The Tigers have rebounded to open 5-1 in SEC competition which includes the series win this weekend over the top-ranked Gamecocks. However, until Missouri accomplishes more in the SEC, the home series loss to Milwuakee will continue to dog and consideration of their resume.

In the early going, the Tigers have a flair for drama and have dramatically altered their course from a couple of weeks ago as a legitimate contender in the SEC East. Next up is a trip to College Station, Texas to square off with the No. 5 Texas A&M Aggies.

Mark West grew up playing and loving baseball. In college, he found an interest in writing and reporting on sports. He graduated from Arkansas State University in 1999 with a Bachelor of Science in Radio and Television Broadcasting with a News emphasis and a minor in Political Science. Mark can be reached at [email protected] or on Twitter @MarkWestCBC Mark began writing a few years ago informally about politics and sports on various blogs, but has focused primarily on baseball writing for the last two years. He loves Arkansas State Red Wolves baseball and writes about the games and the players for the Red Wolves and the Sun Belt Conference. Mark is a member of the National Collegiate Baseball Writers Association, giving him official votes in the Dick Howser Trophy, Regional Players of the Year, and NCBWA All-America voting. Follow on Twitter┬Ā@MarkWestCBC