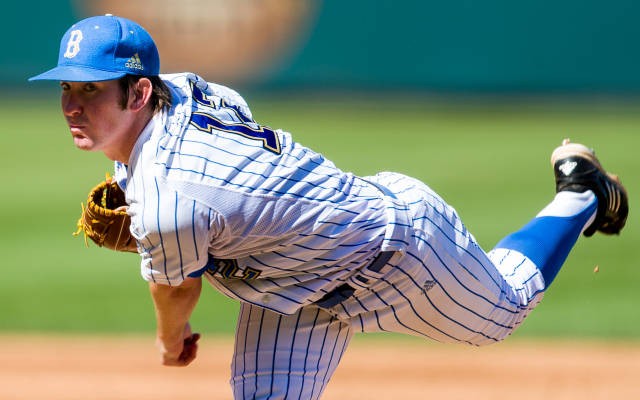 Pac 12 baseball powers continue to dominate in weekend action as several clinched their series early on Saturday behind solid pitching performances and solid performances from key players. Pac 12 teams in the College Baseball Central Top 25 all pulled out wins on the day.

The teams at the top of the conference continue to plod on, holding some of the nation’s longest winning streaks and stretches while some teams looking to get to the top have run into some unexpected struggles.

And just for kicks, a pair of teams decided to try and play a double-header in a single game. Let’s take a look at what happened out west.

No. 6 UCLA Clinches On Rallies

Luke Persico and Kevin Kramer each sparked three-run rallies as the No. 6 UCLA Bruins (20-5, 7-1) clinched their series against the Washington State Cougars (12-13, 1-7) with a 6-1 win on Saturday at Bailey-Brayton Field.

Persico opened all scoring with a two-run double, that he advanced to third on as Kramer beat out a throw to the plate to open a 2-0 lead and break the scoreless pitcher’s duel. He went 3-for-4 at the dish on the day.

Kramer capped off the Bruins’ scoring with an RBI single in the seventh to extend the lead to 6-1. Kramer is mashing the ball this season for the Bruins with a .416/.634/.512 slash line coupled with his four homer and 30 runs scored.

However, Grant Watson (4-2, 1.76) added another quality start, throwing six innings and allowing only a run on three hits and a walk for the Bruins. The run came in the seventh, after he had held the Cougars to two hits over six, when he allowed back-to-back hits to open the seventh before getting the gate.

Joe Pistorese cruised through five for the Cougars but was clobbered in the sixth and seventh innings as he fell even to 3-3.

Suddenly, the Bruins have won 9-of-10 ballgames, including their current seven-game winning steak.

No. 8 Arizona State Clinches Without Drama

The No. 8 Arizona State Sun Devils (17-7, 6-2) normally are an exciting late-inning watch but on Saturday pulled of a, boring by their standards, 6-3 win over the Stanford Cardinal (10-13, 0-5) to clinch the series and keep the Cardinal winless in the Pac 12.

Ryan Kellogg (5-0, 3.26) battled through six innings of work to notch his 23rd career quality start, having allowed two run on seven hits and two walks over six. His main issue on the day was Tommy Edman, which I’ll get to in a moment.

“I know how successful a team is on offense by the production I see out of the lead-off man in the lineup.” – Literal Larry, College Baseball Postseason Analyst.

The lead-off men were key in this ballgame and their efforts led to pretty well all of the scoring in the game.

Sun Devil Johnny Sewald led things off for Arizona State with a first inning walk and would later score on a sac fly off the bat of Colby Woodmansee. In the second he played part in a two-run rally with an RBI single to give the Sun Devils a 3-1 lead.

In the fifth, Sewald reached on a fielder’s choice, but scored on a Jake Peeveyhouse triple as Arizona State extended its lead to 6-2.

On the other side of the diamond, Stanford lead-off man Edman was a thorn in the side of Sun Devil pitching the whole game. Edman led off the game with a double and then scored to take a 1-0 lead.

Trailing 3-1 in the fifth, Edman drove in a run with a single to pull within 3-2. In the seventh, it was Edman again leading off the inning with a walk before scoring on a double-play ball.

However, UCLA closer Ryan Burr entered the game with one-out and runners on second and third in the eighth. After he struck out the first batter he faced, up came Edman with two-outs and two runners in scoring position. Yet Burr would be the salve that solved him with a strike out to end the final threat the Cardinal would have on the day. What helps Erceg hit so dangerously is the other monster bat in the lineup that belongs to freshman Brett Cumberland who is putting up a slash line .329/.634/.496 not far behind him.

Cumberland has six homers, 24 RBI and 23 runs scored and added another run and two RBI in a 1-for-2 day at the plate.

Arizona put the eight runs together with Kevin Newman and Riley Moore each driving in two, Newman with a single and Moore with a double. However, the Wildcats would cap off the inning by plating two on a pair of throwing errors by Ducks pitcher Trent Paddon and right fielder Jakob Goldfarb to take an 8-4 lead.

What’s more interesting is that neither team scored a single run until the 16th inning. Starters Kyle Twomey (USC) and Tyler Davis (Washington) battled to a 0-0 tie before the pens took over.

Twomey tossed seven scoreless and Davis tossed 8.1 scoreless before the game got to relievers Marc Huberman (USC) and Troy Rallings (Washington) who kept tossing zeros on the board until the sixteenth.

Trojan Timmy Robinson hit a two-run single as the Trojans plated three in the top of the 16th to take the lead. However, Washington’s Braden Bishop responded with a two-out, two-run homer (3) to pull the Huskies within 3-2 and chase Huberman (4-1) from the game. Alex Chavarria struck out Levi Jordan to end the game for his first save. 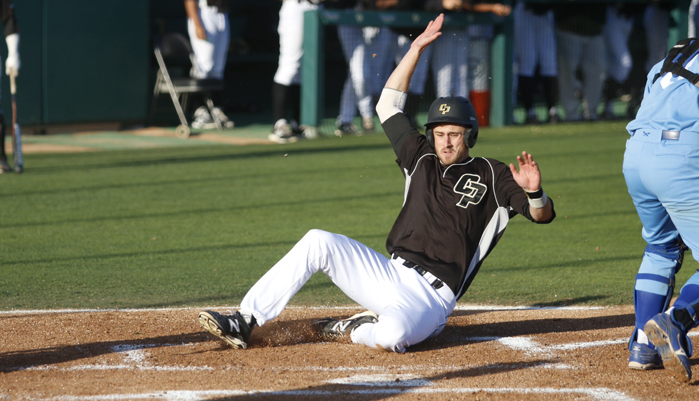 The Oregon State Beavers (20-7, 4-2) came into the weekend, winners of 16-of-18, and looking to continue their hot play with a home series against the struggling Cal Poly Mustangs (9-14) but apparently the Mustangs missed the memo as they clinched the series with a 7-2 win at Goss Stadium on Saturday.

Freshman Drew Rasmussen (3-1), in his first start since perfection last Saturday, gave up six hits and four walks that led to four earned runs over 7.1 innings in his first collegiate loss.

The Mustangs got three RBI each from Brian Mundell and Zack Zehner with Zehner launching his fifth homer of the year, a two-run shot in the eighth.

Meanwhile, Kyle Smith improved to 2-4 allowing an earned run over five while reliever Michael Gomez allowed a run over 1.1 innings before handing the game to closer, Danny Zandona who pitched 2.2 scoreless frames for his fourth save.

The Beavers dropped a home series for the first time this season and look to salvage game three on Sunday.

Couch Surfing: Michigan Runs Away From Rutgers for the Second Straight Day