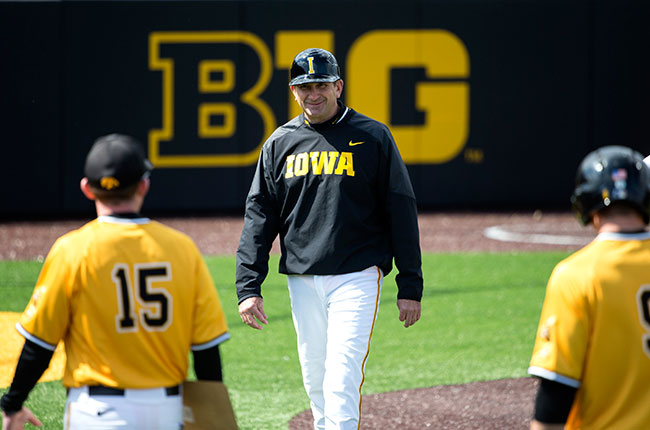 IOWA CITY, Iowa. – The Big Ten conference has seen another changing of the guard this week in the standings. This time it’s the University of Iowa Hawkeyes that stands atop, as the evenly matched teams continue the struggle for top rank within conference play.

Head coach Rick Heller (2nd year) has drove his Hawkeyes to a 21-7 overall record and they remain the only team to have not lost a conference matchup (6-0).
Playing well in all aspects of the game, UI continues to notch wins in their belt, and after this past weekend’s sweep of their three game series at Purdue, UI continues to climb the rankings in national polls. They climbed in to our College Baseball Central Top 25 at No. 19.

“First and foremost we have some talented kids,” Heller stated. “Who believe in themselves and were brought into a system of hard work. They play the game one pitch at a time and don’t get caught up in who their playing but just play the game. We have played solid in all facets of the game, our defense and pitching have been outstanding all year long, and not just our starting pitching but our bullpen is doing a great job.”

Iowa’s Pitching staff has posted a 2.76 ERA, and the weekend rotation of Tyler Peyton, Blake Hickman, and Calvin Mathews, has combined for 97 strikeouts, and an 11-3 record. They have only walked 49 batters, while only allowing 32 earned runs over 127.2 IP.

UI has gotten great bullpen production as well, registering 10 saves, which is tied for second in the B1G with Illinois.

“Offensively we got off to a little bit of a slow start, but we have been hitting our stride here in the last couple of weeks and that’s made things a little bit easier,” Heller points out.

As a team the Hawkeyes are batting .279 and rising. A big part of their increase of late goes to the 1-2 combo of Eric Toole, and Peyton.

Along with Peyton’s accomplishments on the mound, his production at the plate is strong. The 6 feet 3 inch 180 pound junior is batting .362 (5th B1G), and has tallied the fifteenth best OBP in the conference (.415).

“Tyler hits in the three hole for us and is a true dual guy,” Heller added. “We felt like with the improvements Tyler made from the end of last year to this year, we felt we could move last year’s Friday night guy Calvin Mathews, to Sunday. We felt like if Tyler could win on Friday night in the league, then we could compete for a championship.”

Defensively the Hawkeyes are as solid as a team could hope to be. Their .979 fielding percentage is second in the Big Ten, and with play in the field only resulting in 22 errors (1st B1G), that championship that Heller spoke of might be on its way. Iowa also leads the B1G in stolen bases (48).

“Our goal each year is to be a top ten defensive team in the country, and that was one of the first things we tried to establish with our guys when I got here last year,” Heller said. “If we put in the work and practiced on our mechanics, and practiced at the right speed, and put pressure on them in practice to play at game speed, we thought this team was talented enough that we could be a top ten team defensively, and so far so good.”

Last year, Heller drove UI to a 9-1 start, which just so happened to be the best start the baseball team has seen since 1940. He also coached them to a Big Ten tournament berth.

Concluding 2014 with a record of 30-23, Heller cemented his name in Hawkeye lore as the first coach in Iowa history to take his inaugural season and post 30 wins.

This coming weekend will test the Hawkeyes as Heller and team head out on the road for the second weekend in a row to face conference foe No. 12 Maryland (22-7, 7-2 ACC). The Terps just manhandled Nebraska sweeping them this past weekend in a three-game series at home.

“This is an outstanding league from top to bottom,” said Heller. “With the addition of Maryland and Rutgers this year it just makes it even tougher. I knew that if I ever had the opportunity, that this was a league I would want to get into. It’s just been awesome to see the improvements from top to bottom.”