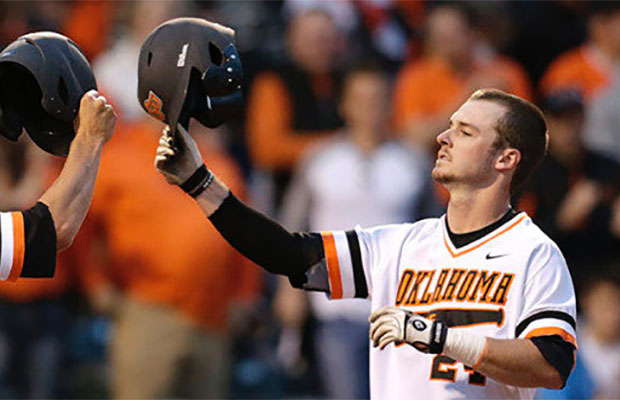 OKLAHOMA CITY, Okla. - Conor Costello had one hit but it proved to be the difference maker in Bedlam as his three-run home run in the fifth led to No. 8 Oklahoma State’s 4-2 win over Oklahoma as the Cowboys clinched a share of the regular season Big 12 title at Bricktown Ballpark Thursday night. Oklahoma State will finish either tied for or in the lead of the Big 12 Conference for the first time ever at the conclusion of the regular season.

Oklahoma State took a 1-0 lead in the fourth on an Aaron Cornell sac fly after loading the bases with no outs on two singles and a hit batsman. Costello stepped up to the plate in the fifth with runners on first and second as Gage Green reached on a bunt single and Zach Fish singled through the right side.

Costello then blasted his shot to left field for his fifth homer on the season that gave Oklahoma State a 4-0 lead.

Jon Perrin made the lead stick allowing two earned runs in the eighth inning after putting two runners on and giving way to Vince Wheeland out of the pen. Wheeland gave up two runs, one on a wild pitch and another on a sac fly.

The Cowboys can clinch the outright title by winning one of their two remaining games against Oklahoma.

WACO, Texas - Cody Jones went 3-for-4 and scored a run while knocking in two more and Dillon Newman allowed an earned run over six innings of work as Baylor upset No. 19 Texas Christian 6-3 Thursday night at Baylor Ballpark knocking the Horned Frogs two games back of Oklahoma State with two games to play in the Big 12 race. Aaron Dodson went 2-for-4 for TCU with two runs scored and three RBI, but his effort wasn’t enough to overcome an unusually not-so-sharp outing by Brandon Finnegan who fell to 8-3 allowing 5 earned runs before being pulled in the fourth inning.

LUBBOCK, Texas - Hunter Redmon capped off a three-hit game as he drove a walk-off single to center field in the 11th inning to lead Texas Tech to a 4-3 win over West Virginia Thursday night at Rip Griffin Park. Jonny Drozd entered the game in relief in the third and pitched 5.2 innings allowing only an earned run to hold WVU in check before the Mountaineers scored two runs in the ninth on reliever Dominic Moreno to send the game to extras.