The ACC saw another great week of pitching performances as even some pitchers who recorded losses certainly threw good enough to get a win but their offenses didn’t do them any favors.

It was hard to narrow the list down, but here are the top five outings this weekend by ACC pitchers,

The sophomore right hander picked up his first win of the season by pitching seven innings of one-hit baseball while striking out four batters. It was also his first start of the year, making two relief appearances earlier in the season.

His performance sealed the sweep for the Yellow Jackets, taking all three games by the combined score of 23-3. The two-way athlete, Gold has done nothing but excel this year – posting a 1.26 ERA and has a batting line .348/.423/.652.

Moss turned down the defending World Series champions San Francisco Giants, who selected him in the 15th round of the 2014 draft and the decision seems to be paying off early on.

The senior improved to 2-0 on the season after pitching seven shutout innings. Moss struck out ten batters in the team’s 4-3 victory over Rhode Island in the first game of Friday’s double header. 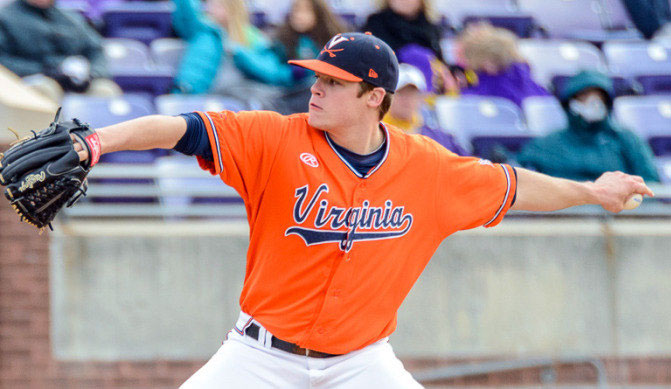 The junior left hander has been as advertised thus far this season. Projected to be one of the first few players selected in this year’s draft, Kirby has delivered in his first three starts of the year – with a perfect 3-0 record.

Against Cornell, Kirby struck out ten batters over six shutout innings. The Cavaliers have been perfect this year, led by their pitching staff. Kirby has allowed only one earned run this season and the rest of the weekend rotation has only allowed a combined four.

McGarity had to be perfect for the Hokies, as it took his offense ten innings to finally score. VT beat Toledo 1-0 in extra innings, meaning the sophomore wasn’t involved in the decision.

Pitching nine innings, McGarity only allowed five hits and struck out eight batters before Erik Payne knocked in the winning run. Strong in each of his three starts now this season, this was easily McGarity’s best start of his career with the Hokies in what is their last weekend series before they start ACC play.

The sophomore from Zionsville, Indiana has continued his spectacular start to the season with another perfect outing. In 20 1/3 innings, Dunshee has yet to allow a run while only allowing eight hits in that span.

Dunshee pitched seven innings this past weekend against Towson, holding them to just a lone hit while striking out nine batters.

This upcoming weekend marks the start of conference play, so not only should we expect even more great pitching performances, but we will see them do so going head-to-head.