GAINESVILLE, Fla. – Although the Gator faithful had to endure a rather frost-laden Valentine’s weekend, the Boys of Florida kept things warm on the playing field with a three-game sweep of Rhode Island to commence the 2015 college baseball season. Quite literally, the Gators’ bats were the only things that were consistently hot throughout the weekend, routing the Rams by a combined score of 37-5, the highest opening weekend runs total for the Gators in nine years (40-8 vs. Cincinnati in 2006).

The majority of those runs came in Saturday’s 22-3 slug fest, but such is not to discount the strong, balanced attack employed by Florida against Rhode Island, as the Gators opened the season with quite the statement performance – providing us with the type of supporting material to validify their worth as a Top 10 program.

As such, the following is a run down of the weekend that was, covering everything you need to know regarding the Gators’ respective performance and what to expect going forward from this energized ball club. 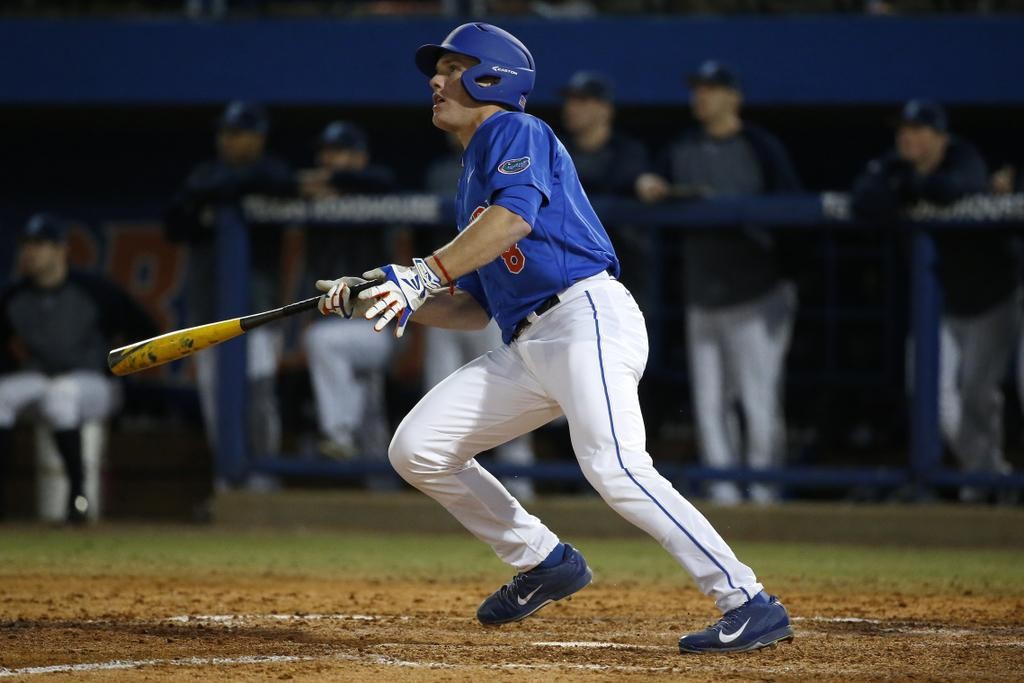 Bader wasted little time falling back into the lineup after missing the first 19 games of the 2014 season and like clockwork, failed to miss a beat with the start of his junior season this weekend. The junior leftfielder out of Bronxville, New York intricately carved out each Rhode Island arm he faced over the course of the weekend, including a stellar 3-for-4 display on Saturday that included a pair of three-run home runs, his second and third long balls of the infant season.

Looking at the stat line above, there’s honestly no question as to how Bader stacks up amongst this weekend’s top offensive performers across the country.

Bader was slotted up into the fourth hole in the lineup following the recent loss of sophomore slugger Peter Alonso (broken foot) and despite the fact that he’s never hit out of that respective slot, he certainly appears to have found a comfortable home after the type of offensive display he put on over the weekend.

Bader is the type of impact player (at the plate, on the base paths, and in the field) the Gators need at the helm of their leadership core if they wish to make a serious push for Omaha down the stretch, and by all accounts thus far, Florida is certainly in good hands. Shore picked up right where he left off at the end of the regular season in 2014, that of giving Florida quality outings and winning said outings in the process. Being held to a set pitch count for the season opener, Shore made the most of his five innings of work, holding the Rams’ offense scoreless on just four hits while fanning four batters and surrendering not a single pass.

The sophomore right-hander was on point from the start of the game and held strong at such a pace throughout the rest of the evening, fanning two in the top of the first and retiring eight consecutive batters before departing after the fifth frame.

His four-seam heater sat consistently between 90 and 93 mph (hitting 94 at times) and was well located down in the zone, as was his changeup – arguably his strongest offering on the night, as he absolutely dazzled with the pitch, generating great movement and a handful of swings-and-misses.

After a pair of stout outings from sophomores Dane Dunning and A.J. Puk on Saturday and Sunday, the Gators look to have a rather promising starting rotation in the making, particularly with Shore at the helm and one of the more reliable safety nets (that of the bullpen) in the country in the background picture.

While the likes of juniors Bader and Richie Martin, as well as sophomores Ryan Larson, Puk, and John Sternagel contributed to the offensive clinic that was this weekend, the most promising (if not most impressive) aspect of the Gators’ three-game sweep of Rhode Island was the involvement from the freshman core of bats and arms – and quite the involvement at that, as nine first-year players received the opportunity to play, including a total of eight in Friday’s opener.

Dalton Guthrie, Mike Rivera, and JJ Schwarz made the starting lineup for each game and did not fail to impress. Guthrie (taking over for Casey Turgeon at second) started each game alongside Martin in the middle infield and from what it looks like, Florida appears to have their leadoff man for the foreseeable future.

Despite starting out with a 1-for-5 showing on Friday, Guthrie turned that around and finished with a .462 (6-13) average, three doubles, and four runs, including a rather impressive 4-for-5 showing in Sunday’s 6-1 victory .

Rivera started Friday and Sunday’s contests behind the dish, impressing with both the glove and bat. Having felt the spoils of Mike Zunino and Taylor Gushue behind the plate, Rivera put any concerns to bed with his performance over the weekend.

His catching and receiving skills looked solid, whereas he was also able to throw out three of the four Rams base runners who attempted to swipe a base. At the plate, he went 3-for-8 (.375) with a pair of RBIs, scored four runs, and wore three pitches in the process.

Speaking of talented bats and gloves behind the plate, perhaps the most impressive bat (in terms of future potential) from the first-year core belongs to Schwarz. Despite grabbing just a pair of hits (2-for-10), the Palm Beach Gardens native displayed an impressive approach at the plate and a handful of well-hit balls throughout the weekend, one of which being a three-run blast over the bleachers in left in Saturday’s blowout victory.

In addition, Mark Kolozsvary, Taylor Lane, Logan Browning, and Christian Hicks all saw playing time and were able to notch their first career hits as Gators.

On the mound we caught a glimpse of two right-handers that will more than likely become key fixtures on this Florida pitching staff for years to come. Alex Faedo entered Friday’s opener in the eighth inning, turning in a solid inning of relief work, and despite surrendering a solo shot to Mike Shurburne, the freshman slinger dug into the pitching rubber and closed out the inning with a pair of strikeouts.

Despite the fact that Rhode Island is far from the types of competitive teams the Gators will face in conference play, Florida still impressed on all fronts this past weekend, as it is not always due to the weakness of your opponent that you are able to plate 37 runs over a three-game period.

With strong showings from the junior duo of Bader and Martin, key sophomore bats, and a core of wildly talented freshman bats (not to mention the fact that Florida is without the big bat of Alonso), Florida is poised to turn in their best offensive season in three years when they went to Omaha (2012).

On the mound, we saw more of the same depth from the bullpen and what looks to be a potential set starting rotation for the road ahead.

The Gators are set to host Florida A&M on Tuesday and will make the trip to Tampa to face off against USF on Wednesday, before heading back to Gainesville for their three-game set against Miami (FL), who swept Rutgers in four games over the weekend.

Expect bigger and better things from this Florida squad, as they clearly exhibited the energy this weekend that should sustain a season-long push toward success in the postseason.