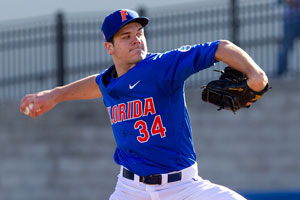 GAINESVILLE, Fla. – When you look at the Florida Gators’ pitching staff, you come across a collective group of quality arms, from the stalwart staff ace in Logan Shore to the bulldog relievers in Bobby Poyner, Aaron Rhodes, and Eric Hanhold, and to the budding talents of A.J. Puk and Kirby Snead.

Heading into the 2014 season, you may have been able to make a case (or at least assume) for then-freshman Brett Morales to have been the name you mentioned when speaking of the stalwart staff ace (or at the very least, budding talent).

One of the premier high school arms in the state of Florida, Morales came into Florida with lofty expectations, turning down potential professional offers (as he flashed the type of talent that would have warranted him at least a second round selection in the 2013 MLB Draft) for the opportunity to fulfill a lifelong dream in playing for his beloved Gators.

However, what was built up to be a possibly impressive freshman campaign ended up serving as a season-long case of the growing pains for the young right-hander.

Morales’ season was a back and forth affair, one that saw the Tampa native turn in a solid outing, only to follow it up with lackluster showing his next time out…rinse, cycle, and repeat. Morales got the starting nod for the Saturday afternoon contest against Maryland (weekend season opener), but was chased from the game in the top of the fourth after surrendering three runs and leaving runners on the corners, both of whom would score in the Terrapins’ eventual 9-7 victory.

He flashed a noticeably improved curveball in his season debut and proceeded to improve his approach in his second start, one that would serve as a legitimate test as it came against a dangerous Miami offense. Morales was stout in that effort, flashing his impressive fastball/changeup combo to the tune of a four inning outing that held the Hurricanes to just a single run.

Morales’ next appearance came out of the bullpen against Illinois, but was unable to put anything together, ultimately surrendering four runs on three hits in just 1/3 of an inning of work. He would have to wait a couple of weeks before he got another call to the mound, that of a start against Illinois State, wherein he tossed 4.1 innings of one run ball, while fanning five batters in the process, perhaps his defining outing on the season in terms of the stuff he displayed off the rubber. As such, these inconsistencies ultimately limited him to just 23.1 innings on the season, as he brandished a 6.56 ERA over 11 appearances (5 starts).

Nevertheless, such can be chalked up as little more than growing pains and part of the learning curve that a vast majority of premium talents coming out of high school must endure before making the proper adjustments toward realized stardom. After some innings for the Bourne Braves of the Cape Cod Summer League over the summer months and through some adjustments during both fall and spring practice, Morales is poised to outgrow the growing pains of 2014 and become the weekend rotation fixture that he was (and still is) expected to be upon his arrival on campus.

When you see him pitch, you automatically recognize the natural talent and flashes of polish that will translate nicely to professional ball. He owns an athletic frame (6-1, 195) and employs such an easy, effortless delivery that he can repeat with ease, which is ever the more impressive feat given the fact that he transitioned to the mound late in his high school career. With that effortless delivery he employs a rather low stride that includes a slow leg drop, which allows him to maximize his balance and of course, make for an easy repetition of his delivery.

Morales wields a rather advanced three-pitch mix consisting of a four-seam fastball, 12-6 (more of an 11-5 as of late) curveball, and circle changeup, all of which grade out at the very least above average. His fastball sits primarily in the 88-93 mph range (expect to see that jump a tick or two with not only his development, but also the new regulation balls) and has solid sinking action. He commands the pitch very well and has displayed excellent control of the offering, as he can locate the pitch across the zone with relative ease.

While his fastball is impressive in its own right, it does not compare to the polish he puts on his changeup. I’ll be the first one to tell you (and I’ll wager all of my credibility when I say this) that his changeup has the potential to be the most lethal in all of college baseball once he perfects his command of the pitch.

Morales feels most comfortable with the change as his go-to pitch, as he can effectively keep hitters off balance and has good enough command to throw it in any count so as to generate a swing and miss – he can mask the pitch nicely, as it leaves his hand in the same manner as his heater. In his time at Florida, he has been able to work on his tendency to push the pitch away (left and right), generating better overall control of the offering.

As for his curve, improvement has been noticeable in his time at Florida, as he displayed impressive spin on the pitch at times throughout his freshman campaign. Even though he can effectively keep batters off balance, the pitch could use more break and if he keeps it down more consistently, it has the potential to become more of an out pitch to compliment his changeup. Like his other primary offerings, he can locate the pitch relatively well in the zone, but work still needs to be done to improve his command of the pitch.

He has the tools to be wildly successful and there’s no reason to suggest that he cannot tap into his potential given the improvements he’s made thus far – and you can count on Florida hoping he can fully access such tools going forward, as they are in need of finally supplanting a definitive weekend rotation, which already looks solid with Shore and Puk at the helm of the rotation.

Coming into his freshman season he was determined to demonstrate his natural tools on the mound. Now a year later, the objective is the same. Look for Morales to get things going in tonight’s midweek matchup against South Florida in Tampa, as the Gators are set to build off their success against Rhode Island in this past weekend’s season opening series.