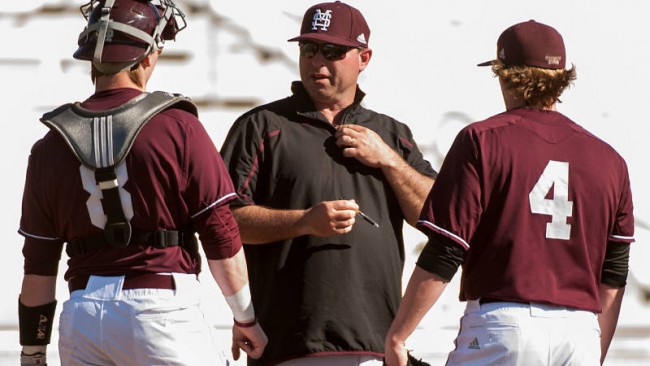 A few weeks after dismissing head coach Sunny Golloway, Auburn is moving forward with their national search for his replacement.

On Monday, Kendall Rogers of D1Baseball.com reported that Mississippi State assistant coach Butch Thompson was interviewing for the position on Monday with former Clemson head coach Jack Leggett set to do the same on Tuesday.

According to the same piece, more candidates are scheduled to interview later in the week, but the first two men to officially throw their hat in the ring for the job are interesting, because if either one is chosen, it could say a lot about Auburn’s approach to the program moving forward.

Neither of these two coaches would be the wrong choice, as least as far as I’m concerned, but they’re just two very different choices that could serve different purposes for the Tigers.

Thompson is undoubtedly an up-and-comer in the coaching world. His name is now mentioned for just about every opening at a major program. He’s served as an assistant at three SEC schools (Georgia, Auburn, and MSU), giving him varied experience across the league, and at 44 years old, he’s still a young man.

Hiring him would be the long-term play for Athletic Director Jay Jacobs and Auburn. If things go well, Thompson is the type of coach who could stick around the Plains for a good long while and establish himself and the program as stalwarts in the SEC. Certainly, given his youth and outstanding track record to this point, he holds an immense amount of potential.

The drawback is that he has never been a head coach. Sure, he has worked under some very successful head coaches, but we’ve come to learn that there is no assistant coaching experience that can truly prepare someone for being the head coach of a major program. That means that Thompson, as promising as he is, inherently brings with him some risk. There are plenty of talented assistant coaches who just never quite made it as head coaches.

That brings us, of course, to Jack Leggett, who has head coaching experience in spades. For 22 seasons at Clemson, his Tigers were among the best programs in college baseball, and that makes him more of a “plug-and-play” choice for Auburn.

He’s been around the block a time or two, there won’t be any head coaching learning curve for him, and it’s easy to see a scenario where he comes in and leads the team to success right away. Auburn is ready to win now, and Leggett is a “win now” type of coach. In the short run, he’s an incredibly safe choice with a low level of risk.

But at the same time, his ceiling isn’t as high as Thompson’s. That’s no knock on his coaching acumen, but he’s just simply not at the same point of his career. He’s 61 years old, which means he’s far from retirement, to be sure, but he’s not going to be someone who will hold the position for several decades, as Thompson has the potential to do if things break right.

There’s something to be said for Leggett as a coach who could provide a seamless transition and a short-term boost, but it’s also tough to ignore the fact that Thompson could be a once-in-a-generation coaching talent that turns out to be a home run hire. That might sound like hyperbole, but consider that every successful head coach in college baseball today started where he is now.

There are a number of drawbacks to searching for a coach in the fall, and I discussed many of those in the aftermath of Golloway’s firing. But there are benefits too, such as not having to compete with other programs for the top coaches available. There may be more interviews to come for this position, but Jacobs could do much worse than hiring either of these two coaches.

College Baseball: Challenges Ahead of New Head Coaches - Part I