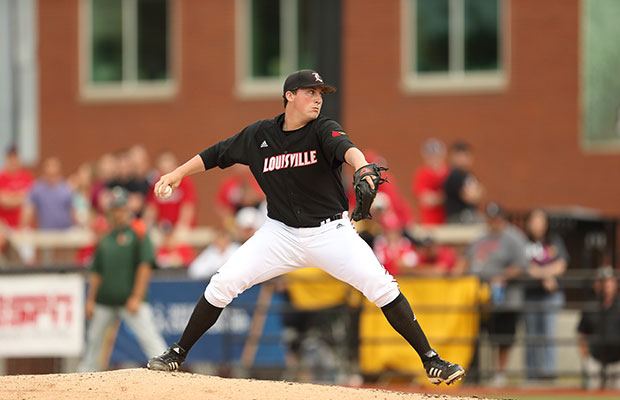 The ACC continues to prove why they are one of the best conferences in the nation, as they have provided fans with weekend after weekend of great games and performances.

With scoring starting to skyrocket again an even bigger emphasis will be put on pitching in attempt to slow down the big offensive numbers. Here are the top five pitching performances from the third weekend of ACC play.

The junior right hander not only won his first game of the season, but also helped propel the Eagles to their first ACC victory of the 2015 season.

Pitching in the first game of the series against the N.C. State Wolfpack, Burke pitched 7 1/3 innings, allowing five hits and one run while striking out three batters in the win.

Burke has had a rough start to the season, with his ERA pushing seven runs (6.75) entering the game. With the one run allowed, he was able to drop it 5.46. Burke currently leads the team in starts and inning pitched.

Crownover and Keselica share this spot because not only because they both had equally good starts but they did so against each other.

In the opening game of their weekend set, the two combined to pitch over 16 innings of shutout baseball and forced the game to go into extra innings with the score tied 0-0.

For Keselica, he has now gone back-to-back weeks without allowing an earned run. Against Clemson, he pitched eight innings, walked three, allowed four hits and struck out nine batters. With the outing he dropped his ERA down to 1.58.

Clemson’s starter Crownover continued his great start to the season with 8 1/3 innings of five hit, seven shutout baseball. The righty dropped his ERA to 1.09 with the outing.

Johnson pitched seven innings, only allowing five hits and one run while striking out five batters. The lone run was allowed in the first inning, and pitched the remaining six innings of his outing scoreless. Johnson has seen a lot of ups and downs this season, posting a 5.65 ERA but is tied for the team lead in starts, and is second in innings pitched and strikeouts.

It’s no surprise finding Louisville’s ace here as natural talent wise, Funkhouser is one of the best in the entire nation.

Against Notre Dame, Funkhouser pitched seven innings of shutout baseball, while striking out eight batters and only allowing four hits. The win was Funkhouser’s second of the year, evening his overall record at 2-2.

All three pitchers came into the game as a reliever and pitched multiple innings and eventually earned the win for their team.

For Ohanian, he pitched 4 2/3 innings in relief for the Blue Devils and eventually got the win against Pitt. Over his relief appearance, Ohanian only allowed one hit and struck out nine batters.

Pitching 6 2/3 innings out of the bullpen, the sophomore only allowed six hits and struck out three keeping the dangerous Hurricanes bats off balance.

O’Donnell earned his second win of the season by pitching 6 1/3 innings in relief in the Wolfpack’s lone win over the weekend (split the series with B.C. 1-1 after third game was cancelled). The sophomore entered the game in the ninth inning and pitched the rest of the way, only allowed two hits and an unearned run while striking out six.