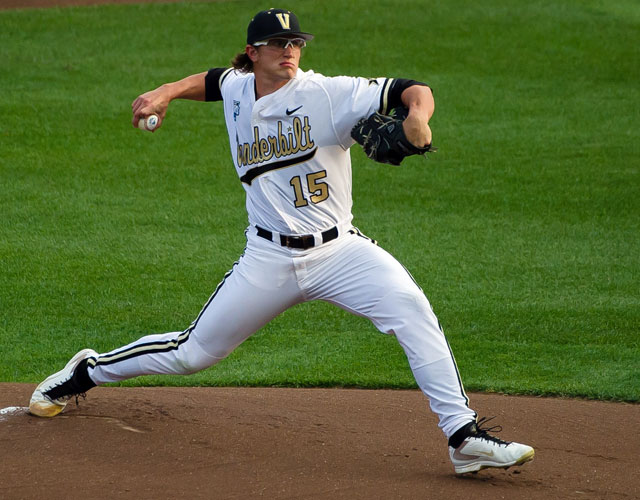 NASHVILLE, TENN. – Junior righty Carson Fulmer and the defending champion Vanderbilt Commodores face elevated expectations coming off a dramatic victory over the heralded Virginia Cavaliers in the 2014 College World Series. Vandy’s expectations are beginning to materialize as the Dores sit atop the College Baseball Central preseason Top 25 poll and have four players named to the Louisville Sluggers preseason All-American squad.

While championship game hero John Norwood is gone along with his clutch, title-clinching home run, many faces are still around and hungry to be the first repeat champion since Southeastern Conference rival the South Carolina Gamecocks pulled off the feat in 2010 and 2011.

Staff ace Tyler Beede is also departed, via the Major League Baseball Draft, but the pitching staff remains mostly intact with the main questions lingering in the bullpen. Juniors Fulmer and Walker Buehler have both been named first-team All-Americans and look to anchor a solid Dores’ pitching staff.

The versatile Fulmer went 7-1 while posting a 1.98 ERA last season with 95 strikeouts against 41 walks while allowing a .195 OBA and recording 10 saves. However,  Buehler led the staff with 12 wins and a formidable 111 strikeouts with a 2.64 ERA and more than a dominant 3.5-to-1 strikeout to walk ratio.

Junior right-hander Tyler Ferguson was supreme as well posting an 8-4 record and a 2.69 ERA but lacking the late-inning longevity. Sophomore southpaw John Kilichowski and righty Hayden Stone each proved untouchable out of the pen but with 1.57 and 1.71 ERAs respectively and could see action in the rotation as well.

At the plate, the Commodores will return most of their meat with Vince Conde being the only starter, outside of Norwood, not on this season’s roster that averaged nearly more than 5.5 runs per game last season. The lineup will be led by preseason All-Americans Swanson and Sophomore Bryan Reynolds who each hit over .300 in 2014.

First team preseason All-American junior Dansby Swanson hit .333 with three homers 63 runs scored and was on base at a .411 clip drawing 37 walks and is proven as a dynamic producer in the Vanderbilt lineup. Reynolds will continue providing the added electricity to the Dores’ having led the team with a .338 average while hitting four home runs and driving in 54 runs last season. Redshirt junior Zander Wiel led the unit with five homers while driving in 44 runs in 2014.

Junior Rhett Wiseman seems to have found some extra pop in the off-season that should help compliment Xavier Turner in a lineup that looks pretty complete after a successful 5-2 winter swing through the Dominican Republic.

Young talent emerged on the trip with Redshirt freshman southpaw Ryan Johnson having a solid start and switch-hitting infielder Aubrey McCarty, true freshmen Will Toffey and Kyle Wright contributing well on the offensive side.

Vanderbilt is poised with enough on both sides of the plate to stay on top of the polls. Most would be shocked if the Commodores don’t make a return trip to Omaha with a continuation of the stingy staff and potent offense that propelled them to the title in 2014.

The Dores will be Anchors Down, opening their 2015 campaign in the friendly confines of Hawkins Field as they host the Santa Clara Broncos, who finished fifth in the West Coast Conference, for a three-game set starting February 13th.